Introduction
The record of Jamestowne has been greatly expanded over the past two decades and much more is now understood about the lives of these early settlers. John Smith was probably the single most influential individual in the survival of Jamestowne in these first years. He was also a strong proponent of colonization in the New World. For those interested in more details on Smith’s life and adventures—he later explored and named “New England—I suggest you start with the online Wikipedia entry on John Smith. It offers an excellent summary of his life and experiences and is loaded with additional references.

Part 1 of this posting can be found at: https://reninassancemusings.wordpress.com/category/renaissance-bucket-list/

John Smith
Almost every American school child has learned that in 1607, the English settlers arrived at what would become Jamestowne on three ships, the Discovery, Susan Constant and the Godspeed. John Smith was part of that group of 104.
In 1606, Smith was involved with the Virginia Company in London. The Virginia Company had been formed as a business venture to establish a settlement in the New World and initiate trade between there and England. There were expectations of profit from gold and other materials as well as establishing a trading partner in the New World.

Captain John Smith was the driving force that enabled Jamestowne Settlement to survive the first couple of years. And, his untimely departure may have acerbated the “Starving Time.”

Smith was a strong willed individual and found himself in conflict with the three-ship flotilla commander, Captain Christopher Newport who charged Smith with mutiny and had planned to execute him as soon as they landed. Smith, however, in sealed orders that Newport opened upon arrival in the New World, had been named one of the three leaders of the new colony and his life was spared.

Many of the settlers who came to Jamestowne in the early years were upper-class gentlemen who were not accustomed to manual labor. There were few farmers or skilled laborers. Because of the lack of skills and swampy conditions, insects and disease, and lack of ready food supplies, fewer than 45 of the original settlers survived. It should be noted that the original colonists had never planned to grow their own food, but to be resupplied by ships from England and by occasional trade with Native Americans (Virginia Indians, also called Powhatan Indians).

Early in 1608, Captain Newport returned with 100 new settlers but with only limited supplies. These new settlers were unfamiliar with life in the small settlement, and accidently set fire to the village. It was a cold winter, the James River froze over, and they were forced to live in the burned out ruins of their village.

Smith had made peaceful contact with the local Virginia Indians who provided
food, but as Smith wrote, “…more than half of us died.”

One of the investment goals of the Virginia Company was to find gold in the New World. They found what looked like gold, but was really iron pyrite (fool’s gold). The ship’s crew spent several months loading their ships with this worthless mineral, before returning to England for supplies.

Later that spring (1608), a ship brought supplies and 50 new settlers. Smith put them to work building housing and planting farms. He also spent the latter part of the year exploring the James River and Chesapeake Bay waterways. During these explorations, he produced a detailed and reasonably accurate map of the area showing locations and phonetic spellings of the Indian names for rivers and villages (including a detailed description of the property that was the site of Moysenec village—see: I Grew Up on a Farm in Virginia, https://reninassancemusings.wordpress.com/2014/01/06/i-grew-up-on-a-farm-in-virginia/ ).

In December 1607, while seeking food along the Chickahominy River, Smith was captured and taken to Chief Powhatan’s main village on the north shore of the York River, about 15 miles north of Jamestowne. (This would have been about 25 miles downriver from today’s West Point, Virginia.) Powhatan was alarmed, possibly threatened, by the numbers of settlers arriving from England, and Powhatan may have realized that without Smith, the English settlers may have given up and returned to England. In any case, Smith had reason to fear for his life.

According to Smith, as Powhatan prepared to kill him, the chief’s daughter, Pocahontas, “threw herself across” his body “at the minute of my execution. She hazarded [i.e. risked] the beating out of her own brains to save mine; and not only that, but so prevailed with her father, that I was safely conducted to Jamestowne.”* 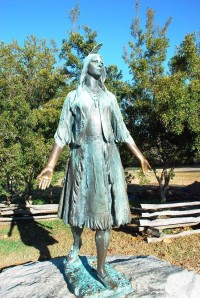 In October, Captain Newport again arrived from England; this time with 70 new settlers, but with no supplies. Captain Newport also produced counterfeit orders for the settlers to pay for the supply missions with materials collected from the area—pitch, tar, boards, and glass.

As the president of the Council, Smith responded with a wake-up call to the investors in London. In what has been termed “Smith’s Rude (meaning rustic) Answer,” he wrote (in part):
“When you send again, I entreat you rather send but thirty carpenters, husbandmen, gardeners, fishermen, blacksmiths, masons … than a thousand of such as we have.”
He went on to explain that the “gentlemen” that arrived consumed too much food and lodging “before they can be made good for anything.”

Soon afterwards, Pocahontas warned Smith that there were those among both the settlers and native Americans who were planning to kill him. Taking charge, he called a meeting and mandated “he who shall not work, shall not eat.” Smith also trained the settlers to farm and work. This strength of character and determination overcame problems presented by the hostile native Americans, the wilderness, and the troublesome and uncooperative English settlers.

Still, harsh weather, lack of water, living in a swampy wilderness, and attacks from the Virginia Indians almost destroyed the colony. Still alarmed by the number of settlers arriving from England, Powhatan would try to starve the settlers into leaving.

Threatened by disease and starvation some settlers did want Smith to abandon Jamestown, but he refused. Some deserted to the Native American villages, but Powhatan’s people also went by Smith’s law which was: “he who works not, eats not”. This was in effect “till they were near starved indeed” and they returned home.

In a May 1609, the Virginia Company sent as governor, Thomas Gates, and 500 additional colonists, including women and children to Virginia. The flotilla of nine ships was wracked by storms, and some vessels sank or were driven ashore in Bermuda (including Governor Gates).

Only 300 of the new settlers arrived in August 1609. John Smith was unaware that these ships had been sent and it did go well for him. London was sending new settlers with no real planning or logistical support.

This emergency was relieved by the arrival of an unexpected ship, captained by Samuel Argall. He had items of food and wine. Argall also brought news that the Virginia Company of London was being reorganized and was sending more supplies and settlers to Jamestown along with a new governor, Lord De la Warr.

Meanwhile, in May 1610, that Governor Gates with 150 men finally arrived after spending almost a year trying to escape from Bermuda. Gates soon found that there was not enough food to support all in the colony and decided to abandon Jamestowne. As their boats were leaving the Jamestown area, they met a ship carrying the new governor, Lord De la Warr, who ordered them back to Jamestown.

Several months later, John Smith was severely injured by an accidental gunpowder explosion in his canoe. This sealed his fate and he sailed to England for treatment in October 1609. He had spent two and a half years trying to do his best for Jamestowne. He never returned to Virginia. History has confirmed his outstanding contribution to the English effort at Jamestowne in its earliest years.

The statue of John Smith looks out over the James River. His statue stands in front of the tower of the fifth Jamestowne Church, built in 1686.

Although colonists would continue to die from various illnesses, disease, and starvation with an estimated 150 of the 500 surviving that winter (“The Starving Time”), the Virginia Company continued to finance and transport settlers to sustain Jamestown. For the next five years, Governors Gates and Sir Thomas Dale continued to keep strict discipline, while the treasurer of the London Company in England, Sir Thomas Smith, continued to find skilled craftsmen and other settlers to send to Jamestown.

Part 3 will look into new information (since I studied Virginia history in school in the 1960s) uncovered that sheds dark light on the “Starving Time.”

* The validity of the account of Pocahontas saving John Smith’s life has been heavily debated. First, of course, it may have happened just as he described, but it is noted that he did not describe the event in his earliest writings. This account did not appear until after he had returned to England. Pocahontas was traveling to England and Smith may have wanted her to be accepted in English society.

It is also speculated that the “execution” of Smith may have been a ritual staged by Powhatan to show Smith to have a new life in the New World and be accepted by the Powhatan Indians.