Air Force flight training was arranged around three phases, primary flight in the Cessna T-41 (Cessna 172), the Cessna T-37, and the Northrop T-38 Talon. I survived—actually passed—the first two phases. With six months to graduation, we transitioned to theT-38.

The T-38, or “White Rocket” as some called it, was an entirely new flying experience. The T-38 is a tandem two-seat, twin-jet, advanced “fast-jet” (supersonic) trainer with a top speed of 1.3 Mach (speed of sound) and maximum G-load of plus 9.0, i.e., the airframe could withstand load forces equal to nine times the force of gravity.

The T-38 Talon is a two-seat fast-jet trainer capable of supersonic flight. The T-38 was part of the Undergraduate Pilot Training program for all Air Force pilots. (USAF Photo) 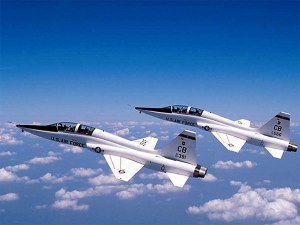 There is nothing like flying 600 knots while only six feet away from another aircraft. This is formation flying. (USAF Photo)

Two Key Instruments for this Flight

Without getting to the physics of the atmosphere and aircraft speed indication systems; we used two units for speed: (1) knots (nautical miles per hour) for takeoff, landing, and low level operations and maneuvers, and (2) Mach numbers for high speed/high altitude operations. For example, a speed of Mach .85 meant the aircraft was traveling at 0.85 times the speed of sound. We did not operate at or above Mach 1.0 except on (usually) controlled and planned missions. Exceeding the speed of sound created a sonic boom, which could rattle windows and had other effects that the Air Force wanted to avoid so we did not upset our civilian neighbors in west Texas. 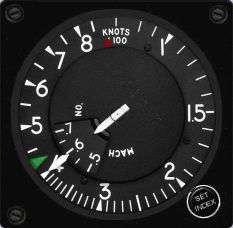 This is similar to the T-38 airspeed indicator. The outer ring indicates speed in knots (x 100). The inner window is the current Mach number.

Basic flight included all of the confidence maneuvers that we had learned in the T-37, but the responsiveness of the T-38 and the physical sensations were entirely different.

I have to mention at this point that now when we collected our flight gear, we now had a “G-suit.” The G-suit, worn over our flight suit, looked like a cross between cowboy chaps, and tight-fitting jeans with holes cut in the knees and the seat. It had an 18-inch hose sprouting from the waistband. Once in the aircraft, the hose was plugged into a port in the aircraft. When maneuvering the aircraft at forces above 1.0 G, compressed air was pumped into the G-suit so that it squeezed on the legs and around the waist to force blood back up into the upper part of the body—namely the head—to prevent the pilot from blacking out: at higher the G-forces.

In addition to the G-suit, pilots can perform an “M-1” maneuver that will provide some relief from G-forces. The M-1 maneuver requires tightening all of the muscles of the abdomen and legs—and usually involves grunting.

This also requires that I explain what “blacking out” means—it does not mean becoming unconscious. The most oxygen sensitive organs of the body are the eyes. If the eyes are deprived of oxygen even briefly, color vision is the first capability lost—everything becomes black and white. Increase the G-force, and the field of vision shrinks inward from the outer edges of vision. Continue increasing the forces, and vision is lost—at this point the pilot is fully conscious, just cannot see, i.e., blacked out. Further increase the G-force can lead to unconsciousness. Interestingly, if the pilot releases some of the G-force, the field of vision actually increases again. Therefore, it is possible to control the G-force to control the field of vision.

In basic flight, the average person can withstand up to 3 Gs before blacking out. Performing the M-1 maneuver will increase the pilot’s tolerance to about 4 Gs. The G-suit can extend tolerance another two Gs. So, a properly trained pilot in an aircraft equipped with a G-suit system can function through six Gs. Keep in mind that the T-38 is engineered to withstand 7.33 Gs—more than most pilots can withstand for any significant time (more than a few seconds).

Time for the Pre Check Flight

After the first 20 hours of flying the T-38, I had qualified to fly solo. That meant I could takeoff, fly around a little, and come back and land—these were the easiest skills required for the T-38. For example, to take off, you simply pulled onto the runway, pushed the throttles (two) to full forward, that is maximum thrust. The aircraft practically leaps forward, and in about 2000 feet the speed is 250 knots (about 280 mph) and the aircraft is climbing at 2000 feet per minute.

Landing was not much harder (although it took a few flights to begin to believe that). Once the jet was lined up with the runway with clearance to land, you simply flew the aircraft at the prescribed speed and attitude and waited for the runway. Eventually, you learned just when to raise the nose a bit and touchdown smoothly.

Instructor flights consisted of reviewing and honing our skills on all of the maneuvers we had learned, as well as demonstrating we knew the steps—by memory—to respond to any emergency that might occur. Our maneuvers included level flight, turns, steep turns, rolls, and loops, and combinations of these. These were called confidence maneuvers, i.e., instill confidence in the student pilot that he was in control!

I actually enjoyed all of the maneuvers, especially loops and rolls. In the T-38, the loop was supposed to be a 3-G maneuver. I was not really comfortable with the G-forces, and tended to fly the loop at a more relaxed 2-Gs. This makes the maneuver a big, lazy vertical circle in the sky—it is great for looking out and seeing the world from upside down at the top of the loop—not good for a dogfight!

Once we soloed, we would fly one lesson with our instructor and one solo to practice what we had learned. At some point in this initial training we would have a proficiency check ride with one of the check pilots from the evaluation group.

Prior to our check rides, the commander or one of the senior officers in our training group would conduct a pre-check flight to ensure we were ready for the check ride.

Our class commander (we’ll call him Major Paladin to protect—me) was my pre-check flight pilot. He was a no-nonsense major, about five feet five inches tall, with a dark, rough complexion, a thin dark moustache, and a perpetually fresh crew cut. He had been an F-100 Super Sabre (fighter) jock (fighter pilots like to be called “jocks”) in Viet Nam before coming to the flight training command. He spoke little, and expected me to conduct the flight with him as an “interested passenger.” Recall that the T-38 is tandem seating—during this phase, the he sat in the back—a separate cockpit. He could see the top of my helmet; I could not see him at all.

We collected our gear and went out to the assigned aircraft. I completed the usual preflight inspection. He was already strapped in as I climbed in the front cockpit. I started the aircraft, got the needed clearances and taxied out to the runway and took off. Occasionally, Major Paladin would ask a question—something about the aircraft such as a maximum speed, procedures, etc., all the while I cruised out to the practice area. I checked in with our command post and began my routine. 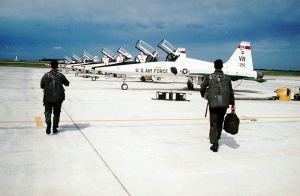 A student and his instructor preparing for their next flight. (USAF Photo)

Somewhere in the routine—I think it was when I was upside down in a roll, he closed one of the throttles to idle and announced that I had a simulated engine failure. I was supposed to recite and simulate the emergency procedures for an engine failure and demonstrate that I could control the aircraft on one engine (the other at idle speed was useless). When that was completed he simply said, “Continue.” I set up for a loop. I added a half roll on the up-side of the loop to position us for best use of the airspace. I did my 2-G loop.

As I returned to level flight, the intercom cracked open. “Richmond, you’re such a wimp, I don’t even plug in my G-suit when I fly with you! The loop is supposed to be a 3-G maneuver. Minimum.” There was some emphasis on the last word.

“Yes, Sir” I responded. I could feel my face flush inside my helmet.

“You have got to make the airplane do what you want it to do!” He added. “Fly it or yourself to the limit.”

Now I was really fuming. But of course, I could not say anything but, “Yes, Sir.” I paused, thinking. “Ah, Sir, may I try that again, Sir?”

“Yeah, go ahead, we have plenty of time.” He sounded bored.

Once again I set up for the loop. Entry speed was supposed to be 500 knots minimum. I eased the speed up to 540 knots. Then I pushed the throttles forward and pulled—firmly, but steadily—back on the control stick and immediately pegged the G-meter at “3.” The airplane bolted up in a tight arc. I continue to pull back on the control stick. The G-meter edged up toward 4 as I came across the top of the loop inverted. My G-suit was pumping away and I was squeezing my abdomen (without grunting!—I did not want to make it sound like it was any effort for me). As the nose started down the back of the loop, I pulled a little more. I lost color vision; then as I pulled a bit more, the field of view got smaller and smaller until all I could see was the big round attitude indicator in the middle of the instrument panel. I held that pressure. Soon it showed the aircraft coming back to level flight and I quickly, smoothly released the back pressure just in time to level off.

By now I figured I was going to be in real trouble, but the deed was done. There was no comment from the back seat. I regained some composure and finished the rest of my routine and was set up to depart the area and return to the base. About that time, he came on the intercom, “Okay, Lieutenant, take us back to the base.”

He instructed me to make two touch-and-go landings and then a full stop. I acknowledged his instructions and heard nothing more from him. The ground crew guided me into the parking spot, I shut down the engine and we got out of the aircraft.

As we walked to the crew bus I was anticipating to be told I was “out of the program.”

Finally, he spoke, “Well, Lt Richmond, you might make it after all. You blacked me out you son-of-bitch!” And he smiled.

What he wanted was to see me exercise positive, firm, aggressive control over the aircraft. He did not care about smooth, or comfort. He wanted the airplane put where it was supposed to be—now!

Before I left the cockpit, I checked the G-meter. The max G-force registered for our flight was 6.2.  I got over being uncomfortable with high-G maneuvers.

About Entry
My first pre-check flight evaluation in the T-38 had the opportunity to be a real disaster. My First T-38 Progress Check Flight was going to be a turning point in my flying training—either out of the program or moving forward with confidence.
Table of Contents Entry
My First T-38 Progress Check Flight caused me to face the fact that I might be washed out of the program.

This entry was posted in There I was... and tagged air force, check ride, g-forces, g-meter, loop, Mach, T-38, There I was.... Bookmark the permalink.