The Batteries of Fort Pickens

Exploring places like Fort Pickens, i.e., post-Civil War coastal defense installations that are distributed around the coast line of the United States made me realize how fortunate we have been, especially since World War II. Most of our coast defense installations, like Fort Pickens, never had to fire a shot “in anger.” Still, spending a day or two exploring sites like Fort Pickens reminds us that throughout the brief history of the United States (1776 – present) we have had enemies and potential enemies. But today, technology and the face of those enemies are very different. They do not sail up to our shores to launch an attack, and our coastal defenses, though historically important, these installations have long been obsolete.

Depending how you count, the Fort Pickens defense system had up to ten separate gun batteries associated with it. Fort Pickens is located on the western end of Santa Rosa Island on the Gulf Islands National Seashore, across the bay from Naval Air Station Pensacola. Each of these batteries or pairs of batteries performed a specific defensive role and were armed with rifles or cannon ranging in caliber from 3 in. to 12 in. Most of these batteries are open to the public for close inspection.

Four of the eight batteries were fitted with guns on disappearing carriages. When not in use or when being reloaded, the gun was lowered behind the protection of the emplacement wall. Aiming information was set while the gun was in the down position. When ready to fire, the gun was raised above the wall. When the gun was fired, the recoil caused the gun to drop down and disappear behind the fortification to be reloaded. This protected the gun and crew from countering shots from an offshore vessel while it was being serviced. Disappearing carriages were operated by counter-balance weights or steam or electrical power.

Battery Cooper used disappearing carriages for its rifles. Here the gun is shown in the hidden or protected position.

All but two of these batteries are accessible to explore, and all but one of the batteries are within easy walking distance of the fort and the campgrounds. Battery Langdon is approximately a mile east of the campground area. Several batteries have guns mounted that are the same or similar to those originally in place.

At Fort Pickens and at many costal defense locations around the country, the guns were removed during World War I for redistribution to Europe or stored for contingency use elsewhere.

When World War II erupted in Europe, military technology rendered most of the existing coastal guns obsolete. Modern battleships, destroyers, and cruisers were equipped with guns with a much greater range and could attack from beyond the range of Fort Pickens guns. Only Battery Langdon (with two 12-in guns with an effective range of 16 miles) and Battery Payne (two 3-in. guns for harbor defense) remained active through WWII. Battery 234 (two 6-in. rapid fire hooded guns) were designed for coastal defense in World War II, but were not ready for service before the war ended.

Rather than provide a catalog of the batteries of Fort Pickens (that is easily accessed via the Internet. See: http://fortwiki.com/Fort_Pickens), this article describes two of the batteries that I found most interesting, especially visually.

Battery Cooper was built in 1906 and as a gun battery, remained operational until 1917. In 1917, the guns of Battery Cooper were removed to support US troops in France during World War I. For twenty years, Battery Cooper had no guns, but in 1937, when tensions leading to World War II threatened national security, four powerful 155mm guns were emplaced in front (on the seaside) of Battery Cooper, and the battery became a plotting room for the new “Battery GPF (“Grande Puissance Filloux,” the French name for this gun arrangement). The “new” battery remained active through World War II and was deactivated in 1945.

The gun on Battery Cooper is mounted on a disappearing carriage .

Battery Cooper’s original guns were two 6-in guns mounted on disappearing carriages. This gun is not one of the original guns installed at Battery Cooper, but is typical of the installation. This is a two story battery with the guns on the top level above their magazines below.

The battery was named for 2nd Lt. George A. Cooper, 15th U.S. Infantry, who was killed in action at Mavitac, Philippine Island on September 17, 1900.

Battery Cooper is located in the dunes on the gulf side of the island, some distance away from Fort Pickens, within easy walking distance from the campgrounds. The four 155mm gun emplacements can be seen arranged around the coastal side of the battery. The combination of the gun on the disappearing carriage, the 155mm gun rings, and the informative signs posted inside the battery structure make this one of the more interesting of the Fort Pickens batteries. 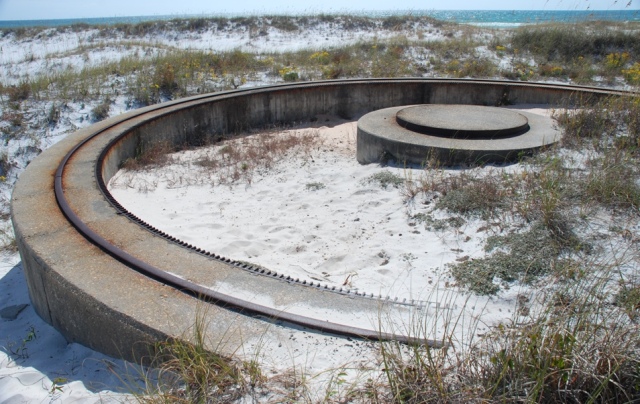 One of four emplacements on the sea-side of Battery Cooper on which 155mm guns were mounted for Harbor Defense. These emplacements were designated Battery GPF.

Walking westward through the dunes from Battery Cooper toward Fort Pickens, one encounters an almost surreal vision of what looks like a menacing, modern—even “futuristic” —weapon (I think I saw guns like this in one of the Star Wars© movies), certainly when compared to the other batteries in Fort Pickens. 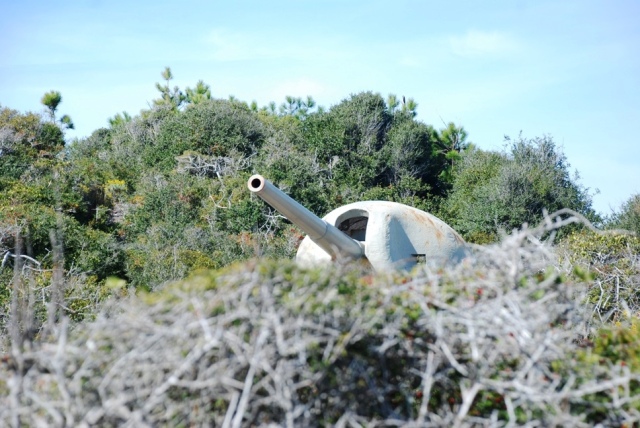 Walking along the sand dunes on Santa Rosa Island near Fort Pickens, one encounters a menacing-looking gun protecting a vegetation-covered dune.

Battery 234 consisted of two steel shrouded 6-in. rapid fire guns. Target data—range and aiming direction (azimuth)—were obtained from observations taken from the steel and concrete tower located behind the battery. This information was passed to crew in the plotting room buried beneath the sand dune between the two guns. Firing solutions—azimuth and range—were sent to, and set by the gun crews. 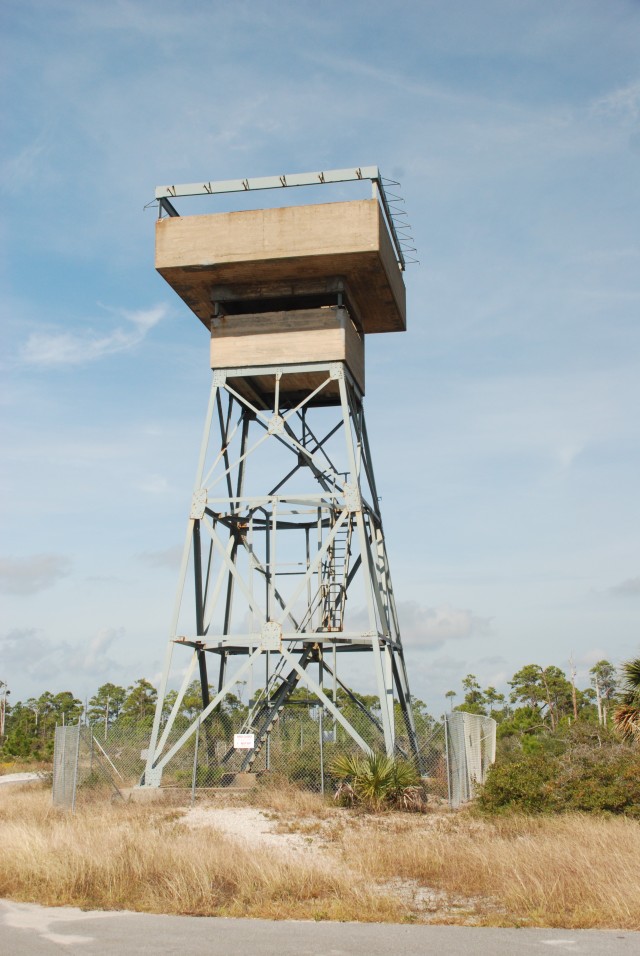 The 4-in. thick cast steel shroud protected the crew from machine gun and small caliber cannon fire. These guns were emplaced in direct response to, and during World War II, but the installation was not complete until after the war and guns were never armed. It was deactivated in 1947.

About Entry
Fort Pickens was supported by ten gun batteries scattered around the west end of the island. These batteries provided coastal protection from 1896 until after World War II. The batteries armament, placement, and operation changed as the perceived coastal threats changed. Several of the batteries were in service until after the end of World War II. I had not read about Fort Pickens before our trip, and The Batteries of Fort Pickens describes several ominous surprises encountered walking through the sand dunes of Santa Rosa Island and Fort Pickens, Florida, near Pensacola.

3 Responses to The Batteries of Fort Pickens