Note: Blue Angels – Thunder over the Bay is a continuation of events during our recent trip to Fort Pickens and Pensacola, Florida.

The Fort Pickens campground offered a distinct advantage for me. The departure route for training flights from Naval Air Station Pensacola went right over the campground. Also, the Blue Angels typically practice two days each week, usually on Tuesday and Wednesday. Our campground was directly across the bay from Pensacola and we saw bits and pieces of their performance each day from our campground. Hanging out at Fort Pickens offered a good view of the whole practice—only the very low passes over the runway were obscured by trees.

I was not involved in scheduling the camping trip, but our trip coincided with what the Blue Angles called their “home coming” show. The Blue Angels are based and NAS Pensacola and this was to be the last performance of the 2014 season. This was also the 100th Anniversary of NAS Pensacola.

Now, I am ex-Air Force, and like living in Tennessee, it is hard to cheer for Alabama. For me, the Thunderbirds are the “home team,” but the Blue Angels do put on a good show! The score would be very close!

The Blue Angels are the Navy’s precision demonstration team. They perform before an estimated 11 million people every year.

I look at the Blue Angels and Thunderbirds from a military pilot’s point of view. What does that mean? I enjoy seeing, but am not awed by, the formations and individual elements of the performance, but by the overall consistent precision they demonstrate.

Formation flight, a major part of these demonstrations, was developed early in the history of air-to-air combat for mutual protection. In air-to-air combat, one aircraft presses the attack against an enemy aircraft and the wingman provides “cover” to protect him from other enemy fighters.

Consequently, when two or more aircraft head into combat, they fly together, in formation. Formations can be flown in “close” formation, as perfected by the Blue Angels and Thunderbirds or “route” formation. Route formation uses the same elements as “close” formations, but aircraft fly wider apart so that wingmen are not required to concentrate solely on the formation. This allows all pilots to look around and be vigilant for enemy aircraft.

Likewise, the lead pilot has to think for and be aware of the challenges each of his wingmen may face. For example, in an echelon formation, the number four aircraft is at a slight disadvantage in turns. He has to fly a little faster to hold position. Consequently, lead must manage his speed to allow all members of the formation to be able to hold position. 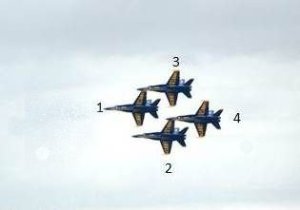 The V-formation can be a three (or more)-ship formation, with the lead out front and right and left wingmen. In a four-ship V-formation, the number 4 aircraft will fly off of the left or right wingman, depending on formation requirements.
During the airshow we witnessed, the above formation was supposed to be a four diamond. The four aircraft take off in a V-formation. Immediately after takeoff, they transition to the diamond. On this day, as they were forming into the diamond, the No. 3 aircraft pulled out of the formation—apparently due to some problem with the aircraft. The show continued uninterrupted with No. 4 flying the left wing until mid-way through the show. Whatever the problem was, the pilot landed, the aircraft was fixed, and No. 3 rejoined the demonstration in time to complete the six-ship formations.
Very few spectators even noticed, and the show announcer made no mention of No. 3’s absence. What was supposed to be a four-ship diamond formation flyover became, according to the Blue Angels own announcer, a “three-ship diamond.” The Blue Angels and the Thunderbirds demonstrations (that I have seen) do not routinely include three-ship elements in their shows.

An echelon formation has aircraft staggered to one side of the lead aircraft, arranged in 1-2-3-4 order. The photograph reflects the fact that the No. 3 aircraft had not yet rejoined the demonstration at the time the echelon formation was being flown.
Six-Ship Flying Delta 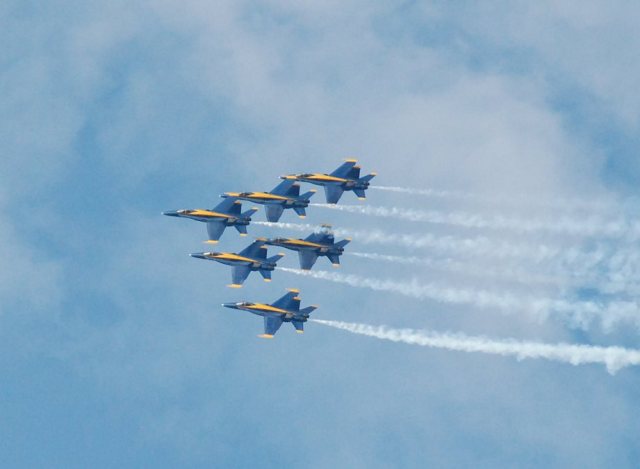 This six-ship formation is formed from the basic diamond formation, with the two solo aircraft tucked in on the wings of No. 2 and 3. By this time in the performance, No. 3 had rejoined the demonstration.

The Blue Angels demonstration includes two solo aircraft the “solo” and the “opposing solo.” Most, but not all of their maneuvers are learned by line pilots. (We never practiced flying inverted with the gear extended!) The basic role of the solo aircraft is to demonstrate the capabilities of the Boeing F/A-18 Hornet aircraft. This includes demonstrations of flight at minimum air speeds, high angles of attack, landing configuration, etc. They also provide high speed head-to-head rolling and inverted maneuvers as the four-ship positions itself for their next maneuver.

Inverted fly-by performed by one of the solo aircraft

One of the most impressive solo aircraft maneuvers is a two-ship fly-by where one aircraft is inverted and perfectly aligned with the other aircraft, and both have their landing gear and tail hooks extended. From the flight line, it looks like some strange aircraft with wheels on both top and bottom.

The two solo aircraft, one inverted, both with landing gear and tail hook extended.

The two solo aircraft, one inverted, both with landing gear and tail hook extended.
The solos join the other four for several six-ship formations.

According to Blue Angels promotional information, the fastest speed used in the demonstration is 700 mph or just under the speed of sound during the “sneak pass” (they use miles per hour rather than knots in public information announcements). The slowest speed is about 120 mph flown at a high angle-of-attack. Both these demonstrations are flown by the solo pilots. The “sneak pass” occurs while everyone is looking out across the runway waiting for the next event. One of the solos flies in from behind the crowd, very low, at near the speed of sound, and with lots of power. Because of the speed, the plane crosses the crowd only slightly behind its sound. It usually catches most of the crowd by surprise.

One element of the airshow that is impossible to convey here is the noise. The sounds of these jets as the fly their maneuvers is every bit as important as the visual as the visual sensations of the show. Four F/A-18s crossing over the crowd with engines in afterburner creates a tangible sensation. Conversation ceases. People just watch.
Join-Ups

One of the most demanding maneuvers demonstrated, but hardly noticed, occurs when aircraft that have separated, as in a bomb-burst maneuver, reassemble into their formation. To rejoin a formation smoothly, quickly and safely requires very precise timing and control by the pilot joining the formation. He must fly faster than the lead to catch up, but slow down smoothly to slide into position. It is a maneuver that takes as much practice and precision as the more impressive aerobatics and formations demonstrated.
Fat Albert

The Lockheed C-130 Hercules, dubbed “Fat Albert,” transport all support equipment and ground crews to airshows throughout the year. It demonstrated its short field take-off and landing capability. This capability is useful for C-130 transport aircraft when delivering critical supplies into combat areas. The aircraft can stay high, away from enemy ground fire, then descend steeply and stop in a short distance once over the airport.
Operational Status

There are seven Blue Angel F/A-18s. No. 7 is a two-seat version of the jet. It is used for media and special guest flights. Blue Angels and Thunderbird aircraft are operationally capable aircraft. For demonstration purposes, the only changes to the aircraft involve removing the gun from the nose, installing a smoke oil tank and a special spring that helps pilots maintain the proper tension on the control stick. Should national defense require these aircraft, they would be repainted and fully outfitted for combat service in 72 hours. Blue Angel and Thunderbird pilots would be absorbed into operational squadrons.

Contents Entry
Blue Angels – Thunder over the Bay Describes a recent Blue Angels demonstration and explains some of the elements of the demonstration from a former military pilot’s point of view.

1 Response to The Blue Angels – Thunder over Pensacola Bay