Four Roses for Mrs. Roberts; Memories For Me

Digging through old school photos recently, I came across a photo that had more meaning and emotion than I would have imagined. The photo was taken in December 1961, during our junior class home room Christmas party. The lady in the photo—and she was a lady—was Mrs. Semple Davidson Roberts, our home room teacher. There were 20 students in our New Kent High School junior class in 1961/1962.

Although I know no details, it was clear that Mrs. Roberts came from a “refined” background. She qualified as a Daughter of the Confederacy and, I believe, a Daughter of the American Revolution. She taught and expected a certain level of formal courtesies in the classroom—courtesies to be extended to her, all members of the faculty, and to each other as students.

One courtesy upon which she was adamant was that she, and we, were to address our fellow students by their “Christian” or given names; not nicknames. Eighty percent of our class had started in the first grade together, and we had given names like (nicknames in parentheses) Shields (“Buddy”), Virginia (“Ginger”), Marylouise (“Marylou”), Richard (“Dickie” although he claimed his parents named him “Dickie”), James (“Jimmy”), Averill (“Junior”), Jeffrey (Jeff), etc. Mrs. Roberts insisted on calling the roll with our given names; refused to even entertain requests to the contrary, and insisted that when we referred to a classmate, we too used his or her formal given name. After the first two weeks of class, we accepted our fate and followed her rule in class; joked about it outside of class.

Mrs. Roberts taught English and French. Her English was flawless. Being a lady of a mature age and from a background of breeding (in which there were some small cracks), she spoke her mind on many issues, but always with precise language and proper grammar. She could call someone a “son-of-bitch” and make it sound like a proper eulogy. She also had a good sense of humor and by mid-year we had come to respect, and even like her.

This was also the year that I had been elected class president.

And the Four Roses

It was December and the day of our class Christmas party. As we were beginning our party, my mother, also a teacher at the school, came in the room with her camera. She was taking photos of the different class parties.

Now, back to the photo: several of the students thought it would be a good joke to buy Mrs. Roberts a bottle of booze as a gag gift. I am not sure we thought that was a really good idea, but we were still teenagers and our brains were not yet fully developed. The two students who were the driving force behind the “prank” were Junior (Averill-left) and David (right) also in the photo. One of their parents actually bought the liquor—there was no under-age purchasing of liquor involved. 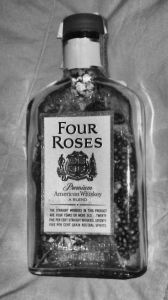 An “antique” Four Roses bottle, filled with dried flowers. Purchased in an antique shop for me as a “nostalgic gift” for me after hearing this story.

When Mrs. Roberts unwrapped the bottle she seemed a little puzzled, looked at the label, then began to chuckle and then laugh. Mother captured the image of her holding the bottle of Four Roses “premium American whisky.” Everyone had a good laugh, and Mrs. Roberts actually thanked us for something totally unexpected, and then she slipped the bottle, unopened, into her purse (“out of sight”), and we went on with our party.

That afternoon my mother sent her photos to be developed. The prints came back the next week, and she brought them in to share. One of the first people to see the photos was our principal, Mr. Mears. He leafed through the photos politely until he got to the photo of Mrs. Roberts holding her bottle of whiskey. As we say today, he went “ballistic.” Mother tried to calm him. “It was only a joke. Even Mrs. Roberts thought it was funny.” He was having none of that.

The next day we—Marshall, our class vice president (who knew nothing of their plans), David and Averill (as “prime suspects”) and I (as class president and suspect co-conspirator)—were summoned to the Principal’s office. I do not recall everything he said, but the meaning was clear. We had effectively committed a school felony by bringing liquor into the school. I recall words like “thoughtless,” “disrespectful,” “irresponsible,” etc. The “irresponsible” was sort of directed at Marshall and me, but especially Marshall since he was the model good student: worked hard, made good grades, courteous, probably scored 99.9 on the “ideal student scale;” and at me because I was the class president, son of a respected teacher, and “just should have known better.” Mr. Mears had not really figured me out, but I am sure I would not have scored high on the “ideal student scale.”

David and Averill were both intelligent and good students, but also had a tendency to be class clowns and their judgment, in his opinion, was clearly flawed.

That lecture seemed to last forever. Finally, it came down to our “punishment.” The entire junior class was “on probation”—misstep and there would be no “junior” in the junior/senior prom. (Each year, the junior class was responsible for planning and producing the prom for both classes.) We all knew Mr. Mears as a man of his word and that he was serious. Ours was a model class for the rest of the school year.

We also learned that Mrs. Roberts had talked to him “privately” on our behalf. She was convinced that we had meant her no disrespect, and she had accepted the event (and apparently the Four Roses—it was never seen again) as a joke as it was intended. No doubt, Mr. Mears reminded her of the school policy of no alcohol on school grounds and that he did not find it amusing.

By the time spring rolled around Mr. Mears had eased up a little. We got to have the prom.
Unfortunately, the nostalgia elicited from that photo does not end there. David, Averill, and I were good friends. We were members of the local Civil Air Patrol squadron and shared interests in aviation, sports (we were on the football team together), and girls.

As mentioned, there were 20 students in our class. We graduated in 1963. In the 50 years following graduation, only David and Averill—the two in the photo—had died. As I understand it David died in a an EA-6B crash making a night carrier landing on a stormy night in the Philippine Sea while deployed during the Viet Nam war; Averill was shot and killed under still uncertain circumstances in Richmond, Virginia at about the same time.

They were both intelligent, loved life, and were an integral part of our class. They are dearly missed and remembered fondly.

About Entry
Four Roses for Mrs. Roberts relates how a photograph of our junior home room teacher at the class Christmas party, elicits a flood of memories and mixed emotions.

1 Response to Four Roses for Mrs. Roberts; Memories For Me