There (I Wish) I was…The Transition® Flying Car

The vision of a flying car that could be parked at home, driven to the airport, converted to an airplane and flown has existed since both cars and airplanes were invented. The first example dates back to 1917 when Glenn Curtiss built a prototype Autoplane. Imagine any conceivable combination of automobile and airplane parts and someone has tried it.

The Curtiss Autoplane (1917) was designed to have a pilot/chauffeur and carry two passengers. It made several short hops. Further development was interrupted by World War I.

Perhaps, the operational design with the most promise was the Moulton Aerocar. Designed and built between 1949 and the early 1950s, several prototypes were built and flown, and at least one remains airworthy today. The Aerocar was never put into production.

The Moulton Aerocar showed promise in the early 1950s. Several prototypes were produced but the Aerocar never went into production.

Finally, the vision of a roadable airplane, or flying car, appears to be on the threshold of production.

The Terrafugia Transition® in its automobile configuration.

So what is the Transition? It is the first realistic production roadable airplane/flying car. As a car, it fits in the standard home garage, uses automotive gasoline, and has all of the features and requirements to meet safety standards of a modern automobile. It is capable of driving safely at highway speeds, maneuvering in traffic, etc. When operated as a car, the wings fold up beside the body of the vehicle. A state-issued driver’s license is required.

The Terrafugia Transition® extending its wings in preparation for flight.

If you want an airplane, drive to the airport, push a couple of buttons, and the wings fold down and out and lock into position. The same 100 hp engine that powered the rear wheels on the ground now drives the pusher propeller. As an airplane, the Transition controls and instruments will be familiar to any pilot. The production model includes navigation displays for both highway and aeronautical maps.

Safety is always a concern—be it aircraft or automobiles. The Transition must meet safety standards for both aircraft and automobiles. Actually, the crashworthiness requirements for automobiles are greater than for aircraft. Also, presumably, pilots have a higher level of training and demonstrated skill than the average driver.

The Terrafugia Transition® in flight.

One safety item that has become available for small aircraft in the past 20 years is the whole aircraft parachute. The Transition comes equipped with a full-vehicle emergency parachute system. If, in the unlikely event, something happens that makes a normal landing impossible, the parachute can be deployed. It lowers the vehicle to the surface at a speed that is survivable by the occupants. 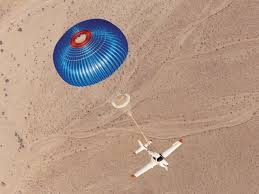 A BRS aircraft parachute system similar to that used on the Transition.

As an experienced pilot, there were many times that poor weather forced us to land or turn back and wait for better weather. With the Transition, yes, you would have to land at the nearest airport, but then you could simply fold up the wings and continue driving toward your destination. Diving is not as quick or efficient as flying, but it beats being indefinitely grounded at an unfamiliar airport waiting for the weather to clear.

Any flying car is going to be a compromise between an ideal aircraft and an ideal car. Weight is a critical factor for any airplane. The added weight of wings and flight control surfaces reduces the amount of “stuff” that can be carried in a car of the same weight.

Flying the Transition requires a pilot’s license. It is designed to take advantage of the FAA Sport Pilot/Light Sport Aircraft (LSA) rules. The LSA pilot’s license is less expensive to obtain. Total training and flight experience required for the license is about half of that required for a Private Pilot’s Certificate and no Airman’s Medical Certificate is required. LSA pilots “self certify” themselves. This level of medical “certification” has been in use for years for glider pilots.

Of course, there are restrictions, too. The LSA pilot is permitted to fly only LSA aircraft, cannot operate an aircraft for hire, may not fly at night, and may not fly in Class A airspace, i.e., into, out of, or around major airports with terminal control areas. Pilots must fly in visual flight (VFR) conditions and with access to visual reference to the ground. If the operator holds a valid medical certificate (e.g., a Private Pilot operating an LSA aircraft) then he must adhere to any restrictions on the medical certificate such as “corrective lenses” required for flight.

LSA aircraft are subject to certain specifications and limitations including a maximum airspeed of 120 knots (138 mph) and limited to two seats. LSA aircraft are supposed to be limited to 1320 lb maximum takeoff weight. Terrafugia has requested a waiver from the FAA to permit a maximum weight of 1500 lb. to accommodate the weight of safety structures required for automobiles.

As an aircraft, the Transition will have to have a valid airworthiness certificate and aircraft logbooks with entries of all maintenance and repairs will. Also, to remain legally airworthy, an annual aircraft inspection will have to recorded in the logbooks by a certified aircraft mechanic.

Despite the limitations and restrictions, the LSA rules make piloting an aircraft accessible to many more people, and makes a vehicle such as the Transition more practical.

One aspect of the Transition that will prevent “a flying car in every garage” is the current price of $279,000.

For more information and to view several videos of flight demonstrations go to http://www.terrafugia.com

About Entry
I suspect that most pilots have wished for or imagined a “flying car” of some sort. Many designers have actually tried to build “roadable airplanes” or “flying cars” but the Terrafugia Transition® may have succeeded. There I (wish I) was…The Transition® Flying Car describes the pilot’s dream of a flying car that may be available next year!

Contents
There I (wish I) was…The Transition® Flying Car describes a flying car that may soon be a reality.

This entry was posted in There I was... and tagged aerocar, aircraft, autoplane, aviation, flying, flying car, performance, pilots, Terrafugia, There I was..., Transition. Bookmark the permalink.