Why I will never complain when a pilot makes the decision to detour around severe weather, even if it adds an hour to the flight.

After graduation from Undergraduate Pilot Training (UPT), I was assigned to the Navigator Training school at Mather Air Force Base near Sacramento, California. At that time, navigator trainees flew in specially outfitted T-29 trainers, a military version of the Convair 240/340 commercial airliners. 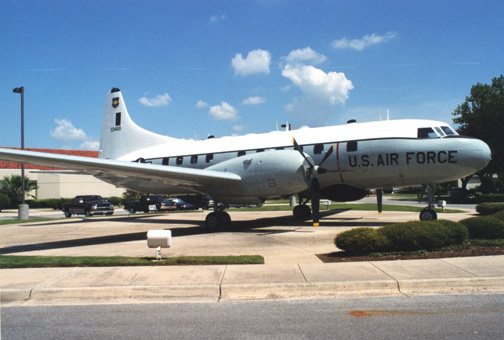 The T-29 was used as a navigation training platform through the early 1970s. It was the military version of the Convair 240/340 commercial transport.

Pilots who came to Mather went through transition training to learn specifically about their new aircraft. That was important because the T-29 was a piston-powered propeller aircraft—not a jet like I had been flying in our initial flight training. Piston powered aircraft have very different engine controls, and the controls must be manipulated in a specific sequence to avoid damaging the engines. The aircraft also required a minimum crew of two pilots—the aircraft commander and the copilot.

This was the 1970s and the T-29 was first built in the late 1940s. We thought of ourselves as members of an antique airplane club.

New pilots first trained for, and check out as, copilots (right seat only). After 500 as a copilot, we were given additional training and checked out as first pilots (left seat qualified) and eventually as aircraft commanders.

When I was stationed at Mather, the United States was still deeply involved in Viet Nam. We were training navigators at full capacity. We had 100 T-29 aircraft, and on any good flying day, they would launch as many as sixty training sorties (flights).
Pilots were flying five and sometimes six days a week, and it did not take long to build flight time and advance to aircraft commander.

My First Flight as the Aircraft Commander

I had just qualified as an aircraft commander and was assigned my first flight as pilot-in-command. It was also my co-pilot’s first operational flight since checking out in the T-29. It was also the first flight for this group of navigation students. The navigation instructor was the senior officer on board. However, “aircraft commander” trumps officer of any rank—while on the airplane.

The T-29 was actually an easy airplane to fly, once you understood the engine controls and the myriad instruments and systems that had to be managed. The aircraft had a maximum takeoff weight of about 44,000 lb (22 tons).

Our assigned route was from Sacramento south to turn east over Los Angeles and fly out over Palmdale and Twenty-Nine Palms, turn around and retrace that route back to Mather AFB. After takeoff, Air Traffic Control (ATC) assigned us a cruise altitude of 16,000 feet.

It was a beautiful day, and the flight southbound went smoothly. We had made the turn back and were coming back over Palmdale, just in time to see an SR-71 Blackbird starting its takeoff run as we passed the runway. The black aircraft accelerated quickly and was moving faster than we were before its wheels left the runway. It took off, continued to accelerate and climbed out in front of us. Talk about feeling slow. In the time it took us to fly over the airport, the SR-71 had taken off and disappeared out of sight.

Over Los Angeles we turned north toward home. About 30 miles north of Los Angeles, we began to see towering cumulus clouds—thunderstorms—on the horizon. As we got closer, we could see a solid line of storms stretching from the slopes of the Sierra mountains west toward Oakland.
We contacted ATC. They reported a line of storms stretching west to Oakland. We continued hoping for a break in the line of storms. If we diverted around the line, it would add an hour to the already six-hour flight.

Twenty miles from the storms, we checked in with ATC. Again the controller reported a solid line of storms. Then he hesitated, and and said, “I can see two dense thunderstorm cells on my scope, but there appears to be a broad opening between them. If you would like, I can give you headings through this area.”

I knew I should not have, but I accepted. I punched the intercom button and advised everyone to, “strap in tight and hold on.”

The Controller gave us a heading and within minutes we flew into the wall of clouds, and it immediately turned dark as night. The navigator instructor followed the route on the navigation radar and hopefully be able to see some of the weather formations.

At first, we made good progress through the storms. It was raining and turbulent, but we had flown through worse routinely.

What both the ATC radar and we did not see was a third, equally large cell sitting directly in front of us, between and beyond the first two cells. We flew directly into the heart of this storm.

The rain intensity increased, sounding like rocks pounding on the aircraft. Bolts of lightning flashed around us as if were under attack. The plane was bouncing life a leaf in a Texas dust devil. I was watching the instruments and fighting to keep the plane upright. My copilot monitored every move. “We are climbing,” he said a little too calmly.

I checked the vertical airspeed indicator. It showed a climb rate of 2000 feet per minute. The T-29 was a good airplane, but it could not climb at that rate on its best day, plus I had the nose down trying to maintain our assigned altitude.

Then an image of a thunderstorm from our weather training manual flashed through my mind. We were in a strong updraft. That meant there could be equally strong down drafts, and since we were flying in the vicinity of the foothills of the high Sierras, I decided to let the aircraft rise in the updraft. I would worry about altitude once we got out of the storm. 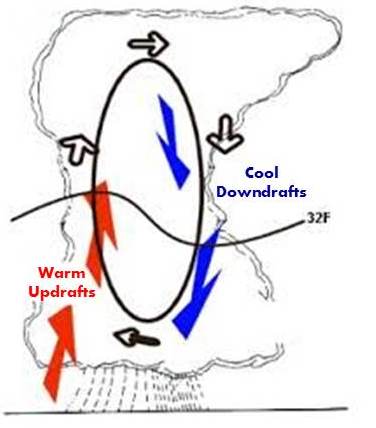 A strong thunderstorm has strong vertical wind currents, both up and down. We were caught in the updraft.

The intercom cracked. An irritated instructor said, “I can’t find the ground.”

I checked the instruments and the attitude indicator showed that we were in a very steep bank. The belly-mounted “down-looking” navigation radar was looking off toward the ocean 100 miles to the west! I cranked hard on the wheel and leveled the wings. “How’s that?” I said.

“Yeah, that’s better.” He was not amused.

Then he called back. “I think I see a possible opening in the weather about thirty degrees to our right.”

Before he finished the word “right” I was turning the aircraft. The turbulence and rain continued to beat on the airplane. The climb stopped, and we rolled out on and held the heading the navigator suggested.

Time slowed down. What was no more than thirty seconds seemed like 30 minutes. Then, literally, we “popped” out of a solid wall of clouds into the bright summer sunshine. Mather AFB was visible on the horizon. We contacted approach control and made a normal approach and landing at Mather.

As the navigators were deplaning, one student stuck his head in the cockpit and asked, “Is it always like this. That was really cool.”

Since we made it through safely, there was no damage to the aircraft, and no injury to the crew, no formal report was required. I did relate our experience to our safety officer with the conclusion that it was not a good idea to let ATC controllers provide directions through storms. ATC radar was not really designed nor equipped to show severe weather.

Two weeks later, during our regularly scheduled safety meeting, we had a fifteen-minute presentation that reviewed the structure of thunderstorms and added that we were not to let ATC vector us through known areas of thunderstorm activity.

Never, ever complain about the added flight time when a pilot makes the decision to detour around severe storms.

About Entry
Thunderstorms – Never Again! describes my first flight as an aircraft commander, with a fresh copilot and a brand new crop of navigator students. They say we learn to make good decisions based on bad decisions–this could be an example.

Contents Entry
Thunderstorms – Never Again! describes my first flight as an aircraft commander of a T-29 with a class of navigator students on their very first flight.

This entry was posted in There I was... and tagged air force, Convair 240, first assignment, Mather AFB, navigator, T-29, There I was..., thunderstorm, training, turbulence. Bookmark the permalink.