“Have You Seen the Concrete Ship at Cape May?”

“Have you seen the concrete ship at Cape May?” my boss asked after I mentioned I had been to the cape over the weekend.*

Not only had I not seen it, I had never even heard of “concrete ships.” It immediately went on my local bucket list, and as usual, I did a little research.

During World Wars I and II there was a shortage of steel, but there was a demand for cargo and Merchant Marine ships. In 1917, the Government ordered 24 World War I Emergency Fleet concrete ships. The building material was also call “ferro concrete” because construction used reinforcement rods (rebar) and iron mesh to strengthen the concrete.

The Atlantus grounded off of Sunset Beach, Cape May, New Jersey prior to its breakup in the 1950s (Archive Photo).

The war ended in the middle of construction and only 12 ships were completed. The S.S. Atlantus, , the subject of the question above, was the second vessel completed. It was launched in December 1917, a month after the war ended. Still it would serve to bring American troops home from Europe and then to haul coal until it was removed from service in 1920.

In 1926 it was purchased to be used as part of a ferry dock for a proposed ferry across the Delaware Bay between Cape May and Cape Henlopen. In the spring of 1926, it was towed to Cape May in preparation for construction of the ferry slip. On June 26, the Atlantus was ripped from her moorings by a severe storm and was grounded inland at Sunset Beach. Despite several efforts, it was never refloated.

What remains of the stern of the Atlantus continues to deteriorate under the relentless tides and storms (photo: 2012, Jeff Richmond)

It became something of a tourist attraction, even luring swimmers out to dive off of the grounded hulk.

In the 1950s, the Atlantus broke into three sections and today only part of the stern is visible. If it were not for the signs at the beach, it would be difficult to identify the flaking concrete and rusty rebar as part of a vessel of any kind. 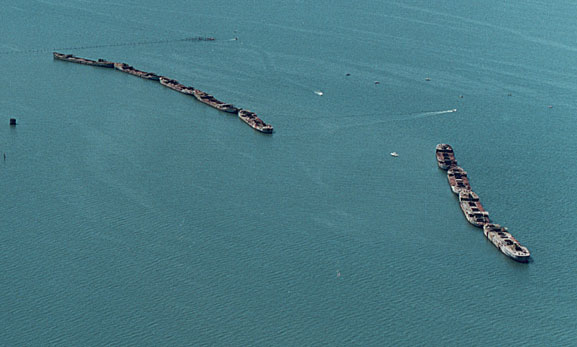 The Atlantus is probably the most famous of the concrete ships simply because of where it came to rest. The fact is, many of these ships hulls, and additional ships built toward the end of World War II are still in use, not as ships but as piers and breakwaters. For example, several of the WWII vessels were sunk in shallow water in the Chesapeake Bay as a breakwater for an old ferry slip and now, a fishing pier at Kiptopeke State Park in Virginia.

For more information, check out: http://www.concreteships.org/

*This occurred several years ago while I was still working in New Jersey.

About Entry
More than 95 years after they were first built, I learn for the first time that the US Government had issued a contract for ships made of concrete. The question, “Have You Seen the Concrete Ship at Cape May?” sent me on a quest to find the concrete ship near Cape May, New Jersey.

Content Entry
The question, “Have You Seen the Concrete Ship at Cape May?” sent me on a quest to find the concrete ship near Cape May, New Jersey.

1 Response to “Have You Seen the Concrete Ship at Cape May?”