The Blue Hole at the Headwaters of the Elk River, Tennessee

“Blue holes” are essentially vertical, underwater caves. Some blue holes occur at sea. There are several spectacular examples, such as the Great Blue Hole, near Belize (Google “Blue Holes” and this is one of the first examples). They get their name from the dramatic contrast in color between the shallow edges of the hole and the dark blue of the deeper hole.

Blue holes also occur inland, away from seas and oceans. Apparently there are at least a dozen locations just in Tennessee that are described as “blue holes.” Blue holes seem to be found in areas where caves and springs are common.

One of these, pictured in a recent Places challenge blog, is located next to a country road near the head of the Elk River in Grundy County in what is called Burroughs Cove. In Tennessee and other mountainous areas, a cove is an area of valley that “pushes” into the mountain and is surrounded on three sides by it. There are many coves in our area and most are named for the families that first settled in them.

I am not a hydro-geologist, but it appears that typically, water wells or flows up through inland blue holes—at least that is the case with the Elk River blue hole. 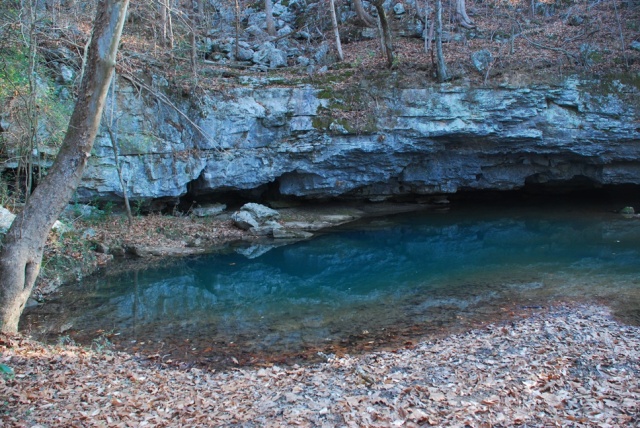 The Blue Hole near the head of the Elk River, in Tennessee. The center of the hole is near the back of the pool of water.

In effect, the Elk River blue hole is a deep—I do not know how deep—vertical cave that acts like a huge spring, bringing water to the surface. The deep blue color on the far side of the water indicates the opening to the blue hole. The water disappears into the cave—the opening to a short underground river. 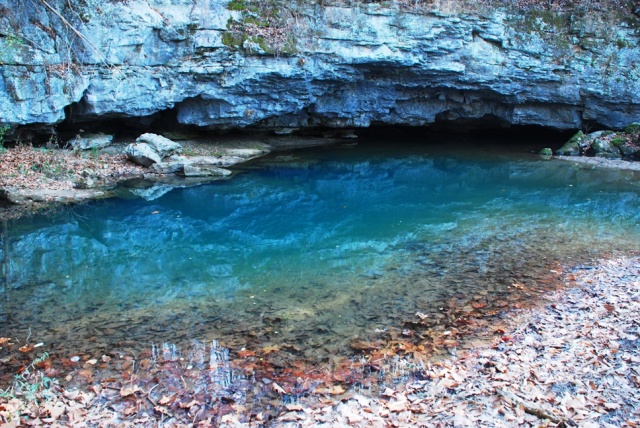 The blue hole’s water flows into the cave behind the water.

The water travels about 100 yards underground and exits into the Elk River. 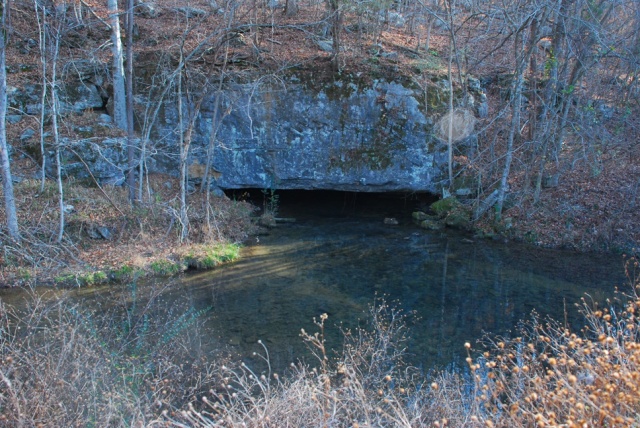 This short 100-yard underground river empties here into the headwaters of the Elk River.

While the blue hole is near the head of the Elk River, it is not the actual beginning of the river, which is farther up in Burroughs Cove.

According to local folk lore, this blue hole swallowed a team of two mules and the wagon they were pulling, never to be seen again. Apparently, the owner had stopped at the blue hole to allow the animals to drink. They waded into the shallow water around the hole, and presumably took one step too many. I have heard this story told by several different people. Fact or legend? I am inclined to believe it. I am also told that at one time, this was a popular swimming hole–it may still be.

Incidentally, there are photos online identified as the “blue hole on the Elk River,” but many of them show a small waterfall associated with the blue hole. I have been to the site shown in my photos several times and have not seen the associated waterfall.

About/Contents Entry
A brief description and photos of the Blue Hole on the Elk River in Tennessee.

7 Responses to The Blue Hole at the Headwaters of the Elk River, Tennessee