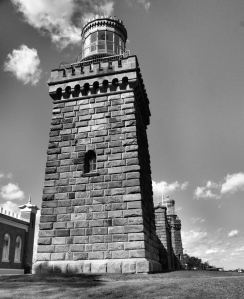 Taken: October 15, 2011 Navesink twin lighthouses are located in the Highlands of Navesink, New Jersey, overlooking the entrance to New York Bay. The Highlands are some of the highest hills along the Atlantic seaboard and an ideal spot for a lighthouse. With a good light, Navesink could be seen from 22 miles at sea, even farther under certain weather conditions. Sandy Hook lighthouse is only four miles away, but it is located at sea level and only marks the entrance to New York Harbor. This lights replaced an earlier set that had been poorly constructed. These lights were first put in service in 1862. Over the years, the facilities were upgraded from oil lamps to electric bulbs. The light was finally taken out of service in 1949. Navesink is one of only seven twin lights in the United States. Today, the site is a state park, largely managed and financed by the Lights Historical Society. The north tower is open to the public. The center structure and wings connecting the lighthouses were lighthouse keeper residences and equipment rooms. Today they house a museum. 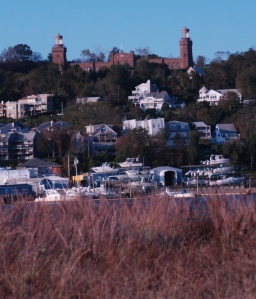 The Twin Lights atop the Navesink Highlands

This entry was posted in Uncategorized. Bookmark the permalink.

2 Responses to North Tower of the Navesink Twin Lighthouses