Okay, it may be a stretch to call this a “woodhenge,” after all, this is not going to last for centuries nor is it ever going to be a mystery, but that was the image that came to mind.

The Tennessee Woodhenge was set up for the Sisters on the Fly Rookie round up, which was to include a group Dutch oven cooking event. The fire ring (formerly used to burn brush) was raked smooth. The “stumps” were sections of trunk from the Old Hickory Tree that had been cut a few months earlier. The ring easily provided room for eight Dutch over cooking sites.

Preparation includes starting the charcoal so that coals will be at their peak heat for the planned cooking time as well and preparing the ingredients. In some cases two people teamed to share the duties. Part of the planning is controlling the temperature inside the oven. We had a chart that showed how many coals, both under and on top of the oven, were needed for a specific temperature.

The stumps served as seats, work tables to prepare the recipe, or a place to set a hot oven. 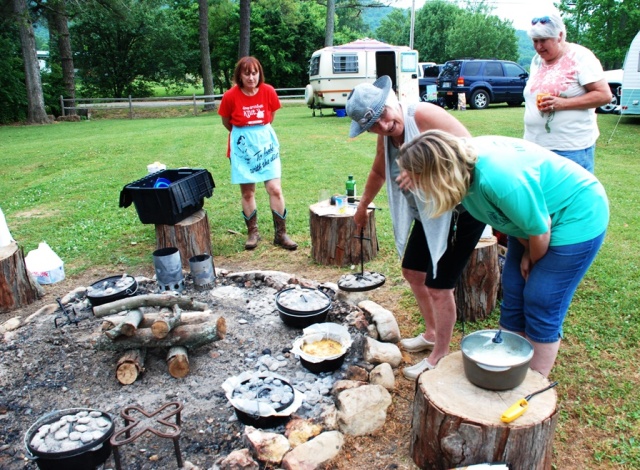 As with any meal, preparation takes time—time to cook. Not much to do but stand around and watch the ovens do their work. A typical Dutch oven dish takes from 45 minutes to an hour-and-a-half.

About 30 to 45 minutes it was time to quickly check cooking progress. Forks probed meat and potatoes for “doneness” while cobblers were gently tested with forks or spoons, then lids were replaced and the waiting continued.

The kielbasa and vegetables proved to be as tasty as it looked coming right off the coals. 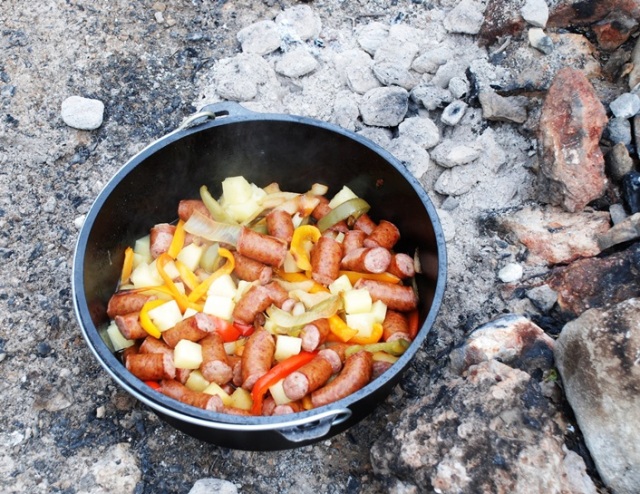 Dishes prepared around this circle included the kielbasa and vegetables, curried chicken and vegetables (to be served over rice), potato-cheese bake, and at least two peach cobblers. Following a successful cooking event, the cooks paused for a group photo.

Everyone showed up for the group banquet of Dutch oven-cooked entrees, sides, and desserts as well as bread and fresh green salads.

Reporting on this event would have been incomplete had I not tasted all of the dishes. Everything was excellent. Of course, the peach cobbler with a little ice cream topped off the meal perfectly.

About:
Ladies participating in the Sisters on the Fly Rookie Roundup demonstrate their Dutch oven cooking skills.

This entry was posted in The View from Pelham and tagged cooking, Dutch, oven, Sisters on the Fly, Woodhenge. Bookmark the permalink.