Airplane of the Month

Editor’s Note: This begins a new monthly series—Airplane of the Month (AOM). If you are interested in aviation or airplanes and would like to see a particular airplane featured here, add a comment to any AOM post. Can’t promise I can report on every aircraft, but have good references for many older aircraft.

If there is an aircraft, especially a transport aircraft, that can be described as being sensuous it has to be the Lockheed Constellation. The aircraft’s graceful curvature across the fuselage and again the upsweep under the signature three-vertical stabilizers combine to establish a unique, distinctive, flowing aircraft profile.

The Constellation, or more commonly, the “Connie,” can trace its beginnings to an historic meeting between Howard Hughes who owned Transcontinental and Western Air (later to become TWA), and Clarence “Kelly” Johnson. Johnson would go on to establish the Lockheed Skunkworks® that would become known for leading-edge technology aircraft such as the U-2, The SR-71 Blackbird, the F-117 Nighthawk stealth fighter, the F-22 Raptor, and most recently, the F-35 Lightning II.

The name “Constellation” applied to several models of aircraft—all with the distinctive “Connie” lines. The prototype flew in 1943 as the L049. An initial production of 22 aircraft followed; 14, designated as C-69 aircraft, went to the US Army Air Force (the US Air Force would not be formed until 1947). Seven aircraft were sold to airlines as Lockheed L049s.

The Constellation L049 received its type certificate, required for commercial service, in December 1945, and within two months, both TWA and Pan Am were using them for transcontinental and international passenger service.

Lockheed continued production of the aircraft under the designations L649 and L749. The only significant difference was that the L749 had an additional fuel capacity for extended range. In June 1947, Pan Am inaugurated its “Round the World Service with the Constellation (L749).” More than 115 L749 and improved L749A aircraft were built. Many of them were purchased as military transports, designated as the C-121.

An Air Force C-121C on display at the Udvar Hazy Annex to the National Air and Space Museum at Dulles Airport, outside of Washington, DC.

In 1951, Lockheed introduced the L1049 Super Constellation, longer, with more powerful engines, greater passenger capacity, and longer range. TWA purchased 26 of these aircraft early in the production. A total of 579 Super Constellations were built; 320 going to the military (as variants of the C-121Bs) and 259 going to airline operators. Many of the military aircraft (e.g., RC-121) were equipped with advanced radars and electronic sensing equipment and were used as radar picket aircraft, flying long hours offshore during the Cold War, to provide early warning for any enemy aircraft or missile activity.

Commercial Super Constellations flew during what might be called the “Golden Age of Air Transportation.” On longer flights, full meals were served on plates with metal dinnerware, cloth napkins, and cups of hot tea or coffee. Equipped with turbocharged engines and pressurization, they could fly above bad weather. Men dressed in suits and ladies in suits or dresses when traveling. There were no cell phones or electronic gadgets; passengers read, snoozed, or actually talked with each other.

In 1952, President Dwight Eisenhower selected the Constellation as his presidential aircraft. Initially, the presidential aircraft used the same radio call signs as other aircraft—usually the make of the aircraft and its registration number (or for airlines the airline and flight number). In 1953, the president’s Constellation flew into airspace where another aircraft had the same radio call sign, creating some confusion between the crews and controllers that resulted in what was described as a “near miss.” It was after that event that the call sign “Air Force One” was adopted. That call sign applies only when the president is aboard the aircraft, and it applies to any airplane the president is aboard.

An Air Force C-121 transport (the same airframe as the early Lockheed L749. Note the shorter fuselage (fewer windows forward of the wing) compared to the SAC Constellation (an L1049). (US Air Force Photo, c.1950)

President Eisenhower named the presidential Constellation the Columbine, in honor of the state flower of Colorado, the home of the President’s wife, Mamie. (For more on Presidential Aircraft see: In the Lofty Steps of Presidents.) 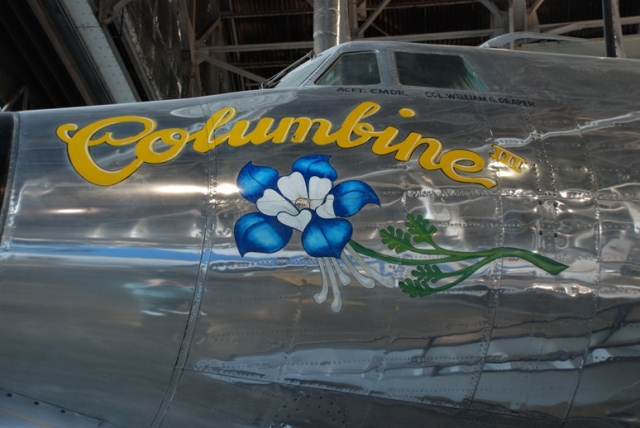 The Nose Art on President Eisenhower’s Columbine III on display at the National Museum of the United States Air Force, near Dayton, Ohio. The plane is open to walk through.

Lockheed built an advanced long-range transport base on the L1049 called the “Starliner.” It had more powerful engines and even greater range. It went into service in 1956. Unfortunately, the first flight of the Boeing 707 jet liner took place in 1957 and the aircraft was ordered by the airlines in 1958. The jet age had arrived, and piston-powered propeller aircraft were soon sold off to second tier airlines, cargo operations, or just parked, and left to decay.

Today, there are fewer than a dozen airworthy or near-airworthy Constellations. The “SAC” (for “Save a Connie”) aircraft at the top of this article remains airworthy. SAC assumed the new name of Airline History Museum, in Kansas City, Missouri, in 2000 and continues to maintain the aircraft. The photo of the SAC Constellation was taken at the Sun ‘N Fun Fly-In in Lakeland, Florida in 1994 or 1995.

There are many things that influence my personal opinion about which aircraft is the best—there are so many good ones to pick from, but from a purely aesthetic point of view, and it’s association with the “Golden Age of Air Travel,” the Constellation is easily my favorite (airliner).

For Those that Have to Know

About
The first in a monthly series titled: Aircraft of the Month. The inaugural aircraft is the Lockheed Constellation.

This entry was posted in Aircraft of the Month and tagged air force, airplane, C-121, Constellation, L1049, L649, L749, Lockheed. Bookmark the permalink.