Lighthouse In Tragedy and Song

The Ship John Shoal Light marks the north side of the ship channel in the Delaware Bay. . The shoals and the light take their name from the ship named John that ran up on the then un-named shoals on Christmas Eve, 1797.

Ship John Shoals was in sight almost as soon as we left the harbor, but it took at least 20 minutes before we were close.

The ship did not sink, but was stuck on the shoals. Fearing the ship would break up, the passengers and cargo were unloaded safely and set ashore on the east side of Delaware Bay, across the bay from their destination, Philadelphia. 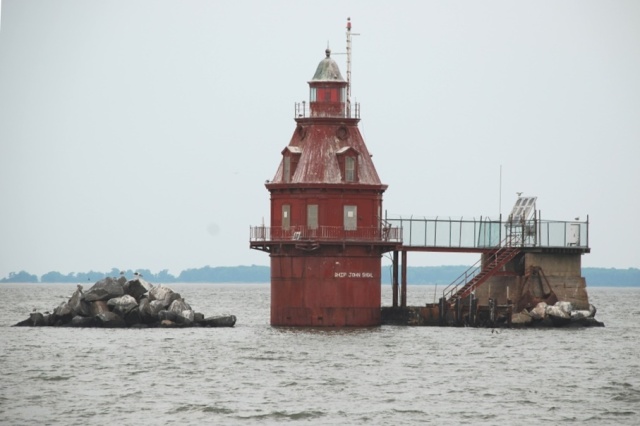 Oil for the early oil lamp was stored in tanks on the man-made island connected to the light.

It was not until 1850 that plans were drawn up to establish a light on the shoals. Construction began in 1856, but a storm destroyed the initial foundation, and a new design was required. In 1873, funds were made available for a caisson foundation, but the lighthouse could not be finished before the winter. A temporary light was placed on the structure to provide some warning. The cast iron superstructure that was to be installed was diverted to another lighthouse, and a lightship was stationed nearby until a new superstructure was available.
The light was finally illuminated in 1877, nearly 100 years after Ship John foundered on the shoals. It was a manned lighthouse until 1973 when the light was automated. It was officially decommissioned in 2011.

The light is a metal cylinder set on a concrete foundation. The base is now protected by rip-rap–large stones about the size of a basketball—piled around the base of the light structures.

A tour boat runs schedule cruises down the Delaware Bay to view most of the lights in the bay. Ship John Shoals is the first light on the tour that leaves Fortescue, New Jersey. In all, six lighthouses—or their bare foundations—are included in the cruise.

The Bonanza II arrives from the morning cruise, under mostly clear skies.

Reservations for the cruise were suggested—the cruise is popular and fills up quickly. I made reservations two weeks in advance. It was a beautiful morning when I arrived in Fortescue, and took photos of the cruise boat arriving from the morning tour. By the time we left early in the afternoon, brisk winds had picked up, the sky turned gray, a haze fell over the bay, and waves were running two to three feet. Spray was coming over the bow, where I had perched myself to get the best possible photos.

2 Responses to Lighthouse In Tragedy and Song