Topical Tuesday* – Lighthouse of the Month

Lighthouses were erected to (1) avoid hazardous areas in or near sea lanes such as shallow water covering sandbars or rocky outcrops that could destroy a ship, and (2) by their very nature, they also provided navigational guidance. Most lighthouses flashed a specific number of time flashes. The number and duration of the flashes identified the lighthouse on the mariner’s navigation charts.

Sea Girt was sort of an exception. It was placed on the shore near what is now the town of Sea Girt to provide a navigational link between Barnegat light to the south and Navasink Light to the north that marked the entrance to New York Harbor. There was a stretch between those two lights when neither light was in view, especially in reduced visibility conditions. Also, a straight line between the two lights brought ships dangerously close to the shore. 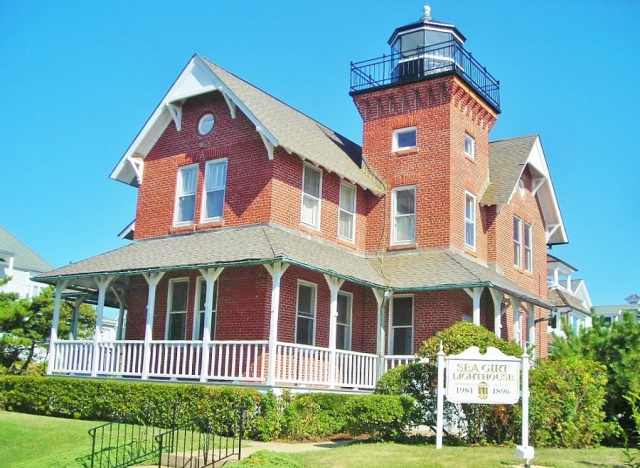 The light would also mark the entrance to Squam Inlet, considered a harbor of refuge when needed. Funds were appropriated in 1889 and, but work did not begin un 1897 following a search for a suitable site.

The light was built as an L-shaped two-story Victorian structure with an attached tower that rose above the roofline. The light was first activated in December 1896. Sea Girt was the last lighthouse erected along the Atlantic coast of the United States.

Like many lighthouses, either the lighthouse or its keeper(s) played roles in history. For example, one lighthouse keeper had been a Union spy, infiltrating Confederate groups to learn their strengths and plans.

The lighthouse itself was the first to be equipped with towers to transmit a radio navigation signal to aid shipping. It worked in conjunction with Navasink and another light north of New York. Sailors could use a directional receiver to determine the bearing to each of these lights and use this data to determine his position from the entrance to New York Harbor.

The light, in one form or another, operated continuously until 1955, except during World War II, when it was extinguished in order to not provide navigational guidance to enemy ships.

A group of Sea Girt citizens organized to preserve the lighthouse. It has since served as a town library, and meeting facility. Currently, on weekends, tours of the tower are open to the public.

*Topical Tuesday: I am trying to get in the habit of producing a set of revolving post topics on Tuesdays. Topics will vary among lighthouses, aircraft, nature/natural history/history and an opinion piece. We’ll see how long this lasts! The Photo of the Week will also continue on Wednesdays.
Photographs © 2012 Jeff Richmond