Over the past few years, one of my photographic missions has been to photograph every waterfall I can.

So, on my recent trip to assist my long-time friend, John, with his house sitting duties, I was pleased to note that one of the suggested places for us to visit was Roaring Run waterfall, near Eagle Rock, Virginia. We had been exploring Fincastle (Botetourt County) Virginia, about 30 miles away, and there had been the hint of an improvement in the weather—the sky seemed brighter and the clouds higher, with a hint of possible sunlight breaking through. We took off to find the waterfall that his sister had suggested.

Her directions were every bit as good as the GPS, and we soon turned into the parking area near the trail to the waterfall.  The hoped-for sunlight did not materialize; instead there was more than a hint of rain.

We chose the the Streamside Trail to the falls.

We elected to take the trail to the falls. The woodland path, which runs along Roaring Run, is an easy trail to hike. Recent rains had fed the steam, and the water flow encountered many rapids visible from the path. Even without the lure of the falls ahead, this would be a perfect path along which to enjoy the sights and sounds of a mountain stream.

Roaring Run along the Trail

There were many small rapids along Roaring Run

The stream cuts through a steep, jagged rock wall. Millennia of weathering and erosion left a jagged rock wall. Staring at the patterns in the rocks, images began to emerge, especially craggy stone faces. The black-and-white image better captures the textures of the wall. (To see a full-sized view of each photo, click on the image in the Gallery below.) 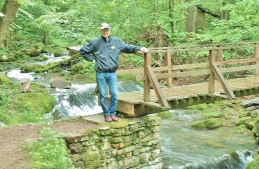 There are three foot bridges across Roaring Run on the way to the falls.

Foot bridges cross the stream in several places, adding interesting vantage points for photography. Signage along the way indicated that this is also a popular trout fishing stream.  A constant, light drizzle accompanied us up the path, but the rain was not hard enough to discourage us.

The sound of rapidly flowing water over the stony creek-bed was  replaced by a louder, steadier roar of water still out of site through the dense forest.

Roaring Run Falls reminded me of a shawl draped over a lady’s shoulders.

Soon, the falls came into view. Every waterfall is different, its character defined by  the same millennia of weathering and the character of the stone bed over which it flows. And the character also changes according to the weather and the amount water flowing over the falls. On this day, Roaring Run falls reminded me of a flowing shawl draped loosely across a woman’s shoulders.

After delaying long enough to take in the sights and sounds, be retraced our steps along the path.Back at the signpost, we followed the path to the Roaring Run Furnace. It is only a short walk; it would be visible from the parking area in the fall after the trees have lost their leaves.

How the Iron Furnace would have looked in operation. Water from Roaring Run powered the huge water wheel.

*”Roaring Run Hot-blast Charcoal Furnace, owned by F.B. Deane of Lynchburg and Samuel C. Robinson of Richmond, Virginia, situated on Roaring Run, a branch of Craig’s Creek….” It was built about 1832, rebuilt in 1847, and shut down and abandoned in 1854. According to one account, in during thirty-five weeks in early 1854, the furnace produced “about 800 tons of metal out of brown hematite ore from a bank one mile distant south.” The pig iron was used to make tools, railroad rails, canons, etc.

It is listed on the National Register of Historic Places. 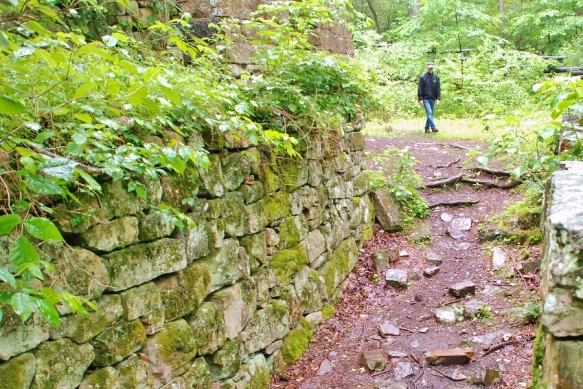 Waterwheel channel to allow water to drain away.

A huge waterwheel powered bellows that forced air into the furnace causing the charcoal to burn hot enough to melt the iron ore. 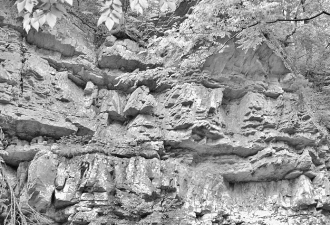 We chose the the Streamside Trail to the falls.

Roaring Run along the Trail

There were many small rapids along Roaring Run 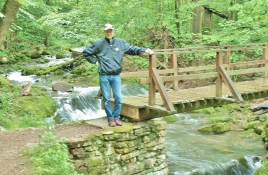 There are three foot bridges across Roaring Run on the way to the falls. 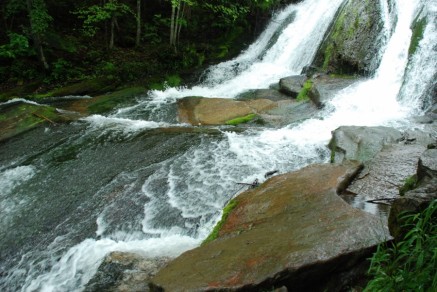 Roaring Run Falls. It is accessible only up to the base of the falls.

Roaring Run Falls reminded me of a shawl draped over a lady’s shoulders.

How the Iron Furnace would have looked in operation. Water from Roaring Run powered the huge water wheel. 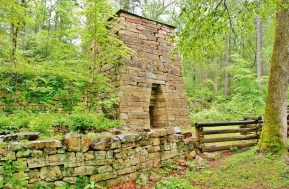 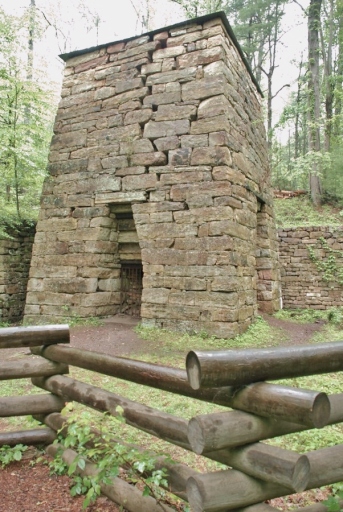 Water Wheel channel to allow water to drain away.
Advertisement