From Takeoff to Landing – Part 1

What you see, hear, and feel on a typical airline flight

It has been several years, but recently I had business that required a flight from Tennessee to Philadelphia. I used to travel a good bit before I retired. It seemed I often sat beside a novice passenger—one who tensed every time there is a thump or bump or change in the aircraft’s attitude—descending or turning. If you have followed my posts, you will recall that I am an experienced pilot having flown military, commercial, and general aviation aircraft. 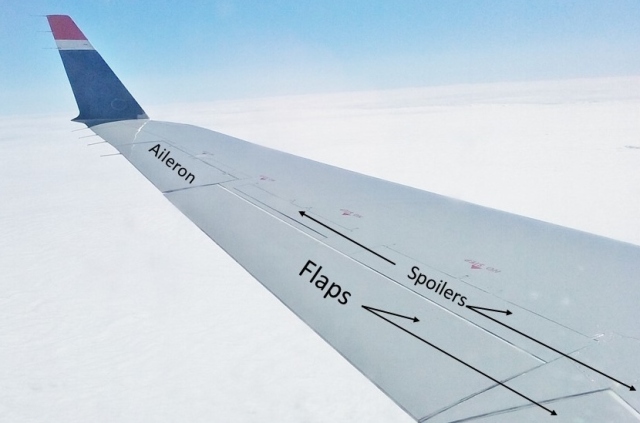 The parts of the wing that tell the story of what is happening during a flight.

Most travelers, even seasoned passenger, have no idea what is going on—they get on the airplane at one place, and get off at the next, much like riding an elevator with seats. Just in case you are ever curious, this is a simple start-to-finish account of what happens—what the pilot is doing and what the aircraft is doing—and what passengers (may) hear, feel, and see on a typical airline flight.

Part I – Going Up

Pilot Activity: During boarding, the pilots are usually busy reviewing the route and the latest weather, entering route data in the navigation system, reviewing takeoff and departure routes, and performing a series of preflight checks to make sure the aircraft is configured for engine-start and taxi. This is usually a challenge-response procedure where on pilot calls out an action, and the pilot who completes the action and responds that the action has been completed.

The Aircraft: Parked at the gate.

Cabin Crew: The flight attendants are making sure that everyone is seated and that all carry-on luggage is safely stowed. They have some very precise guidelines they have to follow to ensure the cabin is safe for flight. Almost everything flight attendants do is mandated in one way or another by the Federal Aviation Administration (FAA). For example, there must be a preflight safety briefing, and flight attendants are required to walk down the aisle to check that seat belts are fastened, tray tables are up and locked, etc.

While boarding, passengers may hear a hum that sounds like an engine. Many aircraft are equipped with a small auxiliary engine that produces power on the ground to provide power for electrical systems and air conditioning.

Pilot Activity: The pilots contact an FAA controller to obtain clearance to move. If at an air-stair, the aircraft must be pushed back—after the air-stair is moved away. A small powerful vehicle, called a “tug,” attached to the nose landing gear, pushes the plane back from the gate. Usually there are wing-walkers at end of each wing to make sure the aircraft can be moved safely.

As the aircraft reaches the point where the tug can be disconnected, the pilots go through the engine start procedure and start one engine. Once running, the aircraft is switched over from auxiliary power to power generated by the engine.

The pilot requests clearance from Ground Control to taxi for takeoff. Once cleared, the aircraft can begin moving forward.

Cabin Crew: The flight attendants complete the preflight briefing and the final cabin checks. They signal the flight deck when the cabin is prepared for takeoff.

The Aircraft: The aircraft begins to move forward on its journey to the runway, often crossing other taxiways and even runways—always under the watchful eye of a ground controller. At this point, usually, the flaps are in the fully up position. Some operators set the takeoff flaps before they begin taxiing (see the first photograph).

Pilot Activity: One of the pilots concentrates on controlling the aircraft as they move along taxiways toward the runway. Usually, the pilots are instructed to follow a specific route to the runway, and they have traffic rules they have to follow along the way. They may have to wait before crossing a runway due to landing or departing aircraft, etc.

Initially, they may be taxiing with only one engine–to save fuel on the ground. If so, the other pilot will start the second engine before they get to the runway. They will also configure the aircraft for takeoff. This includes setting the wing flaps to the takeoff position—the flaps will be lowered about ten degrees below the level of the wing. This setting may vary depending on the type of aircraft, aircraft weight, and takeoff conditions. 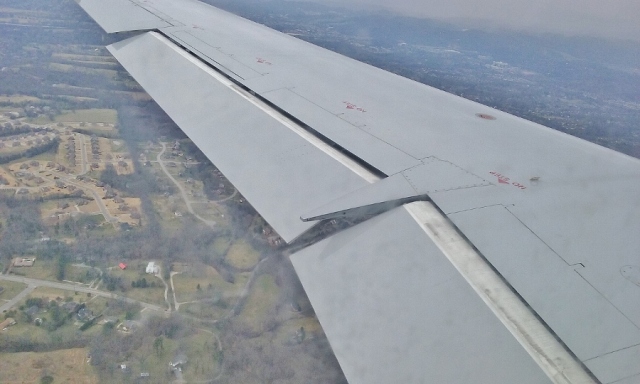 Although this photo was taken in flight, this is approximately how the flaps will look for takeoff.

Lowering the flaps increases both the lift and the drag that a wing produces. At smaller deflections, e.g., ten degrees for takeoff, the benefit in increased in lift is more than the penalty of a little increased drag.

Some aircraft have squeaky brakes and may be noisy as the pilot slows the aircraft to stop. Aircraft tires are very hard, and it is not unusual to hear the thump-thump-thump of the wheels rolling over seams in the pavement.

If the airport is busy, they may have to stop-and-go as planes in front of them move up for takeoff. If there is little or no traffic, they may be able to continue moving, including pulling on to the runway to begin takeoff without stopping. As they approach the runway for takeoff, they change the radio to the Tower frequency to obtain clearance for takeoff. Additional switches are moved, and instruments, especially engine instruments are checked.

Cabin Crew: As the aircraft taxis, the cabin crew will complete safety briefings and preparing the cabin and passengers for takeoff and then go to their crew seats for takeoff. You may hear the pilots instruct the crew to “prepare for takeoff.” They must be seated with their seat belts fastened just like the passengers.

The Aircraft: As the pilot puts the flaps down, passenger will hear a brief whine of machinery as hydraulic or electric motors drive the flaps into position. This sound will be heard every time the flaps are moved, up or down. Some aircraft have squeaky brakes and may be noisy as the pilot slows the aircraft to stop.

Pilot Activity: Once cleared onto the runway, the pilot moves the throttles forward and the engines “spool up” to move the plane. The pilot may be “cleared on to hold” or “cleared for takeoff.” “On to hold” means the aircraft can be positioned on the runway for takeoff, but due to other traffic, must wait until it is safe. Immediately after being “cleared for takeoff,” the pilot will move the throttles to the full-power takeoff position, release the brakes, and the aircraft will begin to accelerate.

The Aircraft: The aircraft begins to accelerate. As speed increases, the airplane transitions from being a ground vehicle to an air vehicle. At a predetermined speed, the pilot will raise the nose of the aircraft and the plane will fly off the ground.

Pilot Activity: Within seconds after takeoff when the aircraft is safely climbing, the pilot will raise the landing gear. Again, there may be the sound of machinery—usually a hydraulic system—raising the gear, followed by a thump or two as the gear lock into place and the gear doors close. With the gear up, the plane will climb faster.

Pilot Activity: The pilots are busy monitoring navigation and flight instruments, and if it is a pretty day are also scanning outside for other aircraft. Once at a set altitude—somewhere between 1,000 and 2,000 feet altitude the pilots will raise the flaps. On some aircraft they will raise them in increments, allowing the aircraft to accelerate between each step. Other aircraft, they simply raise the flaps in one motion—this all depends on several elements, including the type of aircraft, its weight, and air temperature.

Cabin Crew: Shortly after the aircraft is airborne, and usually after the flaps are up, the pilots will signal the cabin crew that they may begin their inflight duties. The cabin crew will begin to prepare for whatever food and beverage service is scheduled for the flight, tend to passenger call lights, etc. At this point, the passenger seat-belt sign is still illuminated. There will be a separate notification, at the pilot’s discretion, allowing passengers to unbuckle and “move about the cabin.” That will occur closer to level cruise flight.

The Aircraft: Again, there will be the brief sound of machinery at work as the flaps come up. At this time, the aircraft tends to be noisier—the engines are at a high power setting for climb, people are talking, etc., and you may not hear the flap machinery at work. The plane will climb to cruise altitude—on average about 30,000 feet. The climb will take 15 to 30 minutes. The engine power and airspeed are set to provide the most efficient climb for the model aircraft. Takeoff, departure, and climb portions of the flight ends as the pilots level the aircraft at cruise altitude.

Note that the plane may level briefly and then resume its climb. This is because Air Traffic Control (ATC) has directed the pilot level off briefly to avoid flying too close to another aircraft (several mile’s separation). Once clear of the traffic, ATC will direct the pilots to continue their climb.

Part 2 – Going Down will be posted tomorrow.