The World War II (WWII) Museum was founded in New Orleans in 2000, and, in 2003, designated the official national museum of WWII by the U.S. Congress. Major expansions were completed in 2013 and 2014 that helped bring the museum to national attention. In 2016, my friend and I, both veterans, began planning a visit to the museum—that visit was just completed this February (2017).

The first question that came to mind, “Why New Orleans?”

The Higgins Boat was tested and demonstrated along the shores of Lake Pontchartrain and served in every theater of WWII where amphibious landings were required.

The answer is the “Higgins Boat,” or “landing craft, vehicle, personnel” (LCVP). Based on a flat-bottomed boat designed by Andrew Higgins that was used in the swamps and marshes of coastal Louisiana, the LCVP could pull up to a beach in shallow water—two feet at the bow—and deliver 36 combat-equipped soldiers onto a beach, back away and return to the troop carrier for more troops. During WWII, more than 20,000 LCVPs were built by Higgins Industries and other builders licensed by Higgins.

Allied Supreme Commander, General Dwight Eisenhower, later President Eisenhower, explained southern Louisiana’s contribution to the successful war effort: “Andrew Higgins … is the man who won the war for us. … If Higgins had not designed and built those LCVPs, we never could have landed over an open beach. The whole strategy of the war would have been different” 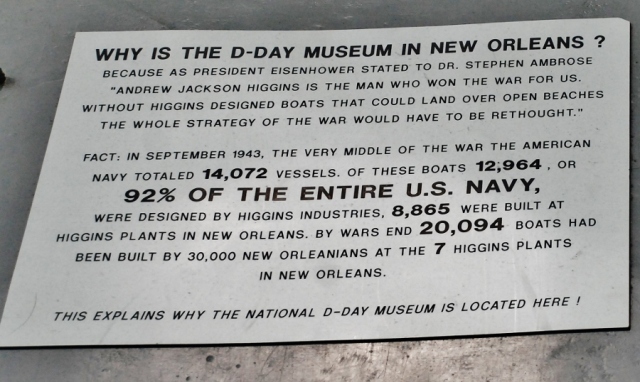 Sign describing the importance o the Higgins Boat during WWII

Constructed largely of plywood, the shallow-draft, barge-like boat could ferry a platoon of 36 men to shore at 10-12 knots (11-13 mph). The troops exited by charging down the boat’s bow ramp. The boat was more than 36 feet long and 10 feet wide. It was powered by a 225 hp diesel engine or 250 hp gasoline engine. Each boat had a crew of four including the pilot or Coxswain, an engineer, and two gunners. It could be armed with two Browning 30 caliber machine guns mounted in the aft of the boat.

A Higgins Boat is prominently displayed in the WWII museum lobby where visitors purchase tickets.

The Higgins Boat is on display in the lobby of the WWII Museum. 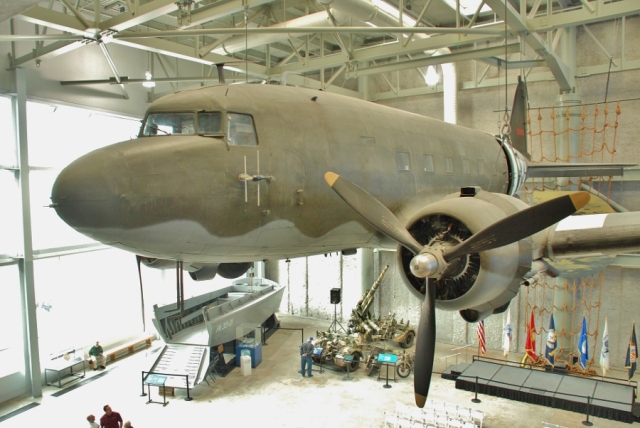 The Higgins Boat can be seen from the upper level of the lobby of the WWII Museum. The C-47 Skytrain is hanging above the lobby.

2 Responses to The National WWII Museum – Why New Orleans?