Travel as I Have Envisioned It Could Be! – Special to this Series

A pop-up feature on my MSN home page, apparently authored by Jodi O’Connel (6/7/2017) (Copyrighted by critterbiz) titled “20 Pricey Destinations that are Seriously Overrated” included a visit to Mount Rushmore 1.

In the author’s opinion, “There is nothing truly free about this national park.” Yes, there is a parking fee of $10.00 per vehicle (for all occupants; $5.00 for senior citizens). There is no other admission fee to take full advantage of Mount Rushmore. I recently visited Mount Rushmore (June 16, 2017). It was one destination of several on a three-week trip in our camper. Many of the other National Parks that we visited have entrance fees of $30.00 that allows access to that park for a maximum of seven days. The Mount Rushmore parking pass is good for one year. 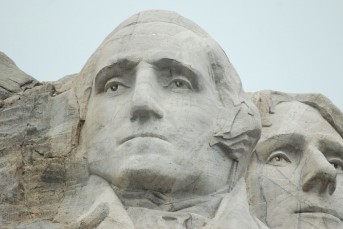 From this point on, Mount Rushmore is very similar to other National Parks. The food concessions are not cheap, there are many opportunities for discretionary spending, and a family of four could expect to pay $40.00or more for meals, and maybe $5 to $10 per person for souvenirs, books, etc. But again, this is comparable to other federal parks and monuments.

The author also comments, “Once you see the crumbling faces of dead presidents….” According to several sources available in the park, the granite that forms the presidents’ faces erodes at a rate of about one inch per 1,000 (one thousand) years. Completed in 1941, it should be several millennia before there will be any visible signs of erosion—I would not characterize the monument as “crumbling.”

In fact, I found the details of the story of the carving of the faces fascinating, and the reason for selecting presidents Washington, Jefferson, Lincoln, and Theodore Roosevelt highly appropriate—and an encapsulated and significant history of our country.

There are many no-cost features that add to the Mount Rushmore experience: (1) free films of the planning and carving of the monument, (2) a museum of the geology and “carving” of the faces, and (3) the sculpture’s studio where park personnel explain how measurements were transferred from a 1/12th scale model in the studio to the faces on the mountain.

The 1/12th-scale model used to transfer dimensions to the mountain during carving.

Finally, the author uses the cost of round-trip air fare specifically to visit Mount Rushmore as a key cost item, as if this was the only way to estimate cost. I suggest it is unlikely a traveler would fly to Paris, France simply to see the Eiffel Tower–and nothing else.  Similarly, it seems that Mount Rushmore is one (outstanding) destination as part of a larger trip (as was the case for us). For example, there are more than a dozen national and state parks and monuments within a 30-minute drive of the town of Custer, SD, including Mount Rushmore. Regardless how you travel to Mount Rushmore, it is well worth the price of parking.

More details  on our visit to Mount Rushmore will appear later in this series of blogs.

Previous: Introduction: Travel as I Have Envisioned It Could Be!

All Photography taken and copyrighted by Jeff Richmond