Atwood and Denver to Grand Junction

One of the stretches of straight road before crossing into Colorado.

A combination of unfamiliarity with the area; wet, cold, stormy weather; traffic; steep climbs and descents; distracting scenery; and still getting used to the new truck; made the trip through Denver, up and over the mountains, into Grand Junction a “nail-biter” on several occasions.

We frequently drive into the Smoky Mountains to camp or just enjoy the mountains, but, by comparison to the Rocky Mountains, we are “flat landers.”

Time to check off another state on our journey.

But let me start at the beginning….

We crossed into Colorado within an hour after leaving Atwood. We could see the terrain change: at first it seemed flat, just like we had seen in Kansas, but we were gradually climbing—gentle inclines to the next area of flat land. It was clear that there were steady increases in elevations in our immediate future. 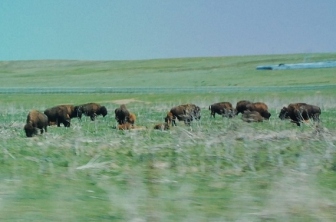 Part of a here of 80-100 Bison grazing along the highway.

It was in this area that we spotted a herd of bison grazing peacefully not far from the highway. While it may have been a wild herd, the scene reminded me of a pasture with cattle, and it had the “feel” of a commercial herd of bison.

After the brief distraction of the bison, I realized that we could see snow-capped mountains emerging from the clouds that earlier obscured the western horizon—scenes that I had seen only in photos before. But our attention quickly shifted to the Interstate highway and traffic

The snow-covered mountain peaks loom in the distance.

We merged onto I-70 and within minutes encountered more traffic than we had seen over two-plus days on Rt 36. We were soon in stop-and-go traffic, which suited me. We worked our way through Denver in good time despite the traffic, and were soon climbing real mountains. The earlier cloud cover became cold, wet rain clouds. As we climbed higher, traffic thinned but the pace increased. 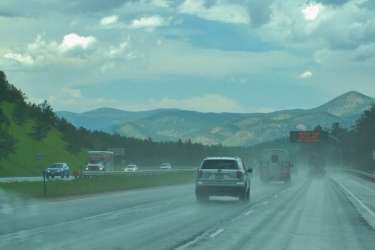 As we started down, the weather got worse.

The roads were wet, visibility was somewhat restricted, and this was my first time in this truck pulling our trailer up the mountain. Cars and tractor trailers were passing us. And, then we started down the other side. I tried to use the trucks towing feature to help maintain a slower speed down the mountain without excessive use of the brakes. The combination of factors resulted in some white-knuckle moments in the unfamiliar environment. But we made it down the mountain and, after a rest stop and lunch, on our way again.

Even with green vegetation, the ruggedness of the mountains show through.

Once off the mountains, the weather improved and there was less traffic. The grip on the wheel eased up, and we could again enjoy the sights. Part of this leg of the journey took us along the Colorado River.

We had reservations at the KOA campground in Grand Junction. We spent two nights there to give us time to rest from the trip and arrive at Ruby’s campground near the entrance to Bryce Canyon with enough time to set up two camps—the camper and my tent site.

Click on images for full view and to read each caption.

One of the stretches of straight road before crossing into Colorado.

Time to check off another state on our journey.

Part of a here of 80-100 Bison grazing along the highway.

Buffalo (Bison) graze along the high plains in eastern Colorado.

Snow-covered mountains emerge out of the distant haze.

The snow-covered mountain peaks loom in the distance.

Starting up the mountain after leaving Denver. The rain started soon afterwards. 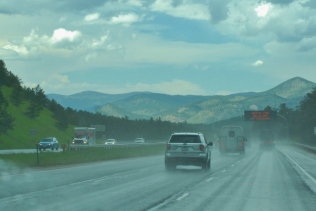 As we started down, the weather got worse.

This tunnel is at the high point of I-70 in the Rockies. There is, however, another road that travels even higher for vehicles carrying hazardous materials not permitted in the tunnels.

The monochrome image emphasizes the sharp peaks and ridges.

This is rugged terrain.

Even with green vegetation, the ruggedness of the mountains show through.

Once on the western slope of I-70, the mountains take on a green mantel of vegetation.

Another tunnel on the western slope of the Rockies going toward Grand Junction. There are at lease three sets of tunnels on this route.