To Devils Tower National Monument, and Beyond

“Beyond” is Custer, South Dakota

Day 17 – Travel as I Have Envisioned It Could Be

One of our first views of Devils Tower

Ever since I first saw Close Encounters of the Third Kind, I have wanted to visit Devils Tower in Wyoming. So, when we were planning the trip to Bryce Canyon, I included Devils Tower on the return trip.

After boondocking (see previous post) at the Coffee Cup Fuel Stop in Moorcroft, Wyoming, we set out on the hour’s drive to Devils Tower National Monument. (Note: Following a geographic naming standard, the possessive apostrophe is not used.)

Devils Tower: Just one part of our adventure.

After Bryce Canyon and everything else we saw in Utah, Devils Tower may have seemed like just another “big rock,” but the anticipation was still high for me.

Finally, the distinctive shape appeared on the horizon. Even at a distance, it is impressive—especially because it is the only “thing” on the horizon; a huge stone monolith, all alone, in this broad stretch of prairie.   We (I) stopped every several miles to take photos as we got closer. 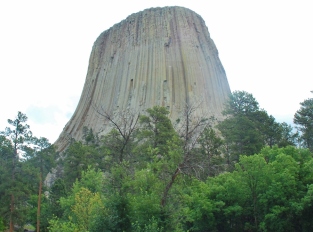 Up close, the columnar structure of the tower is clearly visible.

The name, Devils Tower, was the result of a mistranslation by an interpreter who thought the local Native Americans were calling it “Bad God Tower” in their language. Many Native American tribes associated the word “Bear” with the tower, e.g., Bear’s Lodge, Bear’s Lair, or Bear’s Tipi (Teepee).

In 1906, President Theodore Roosevelt designated Devils Tower as the first United States National Monument. There were attempts to change the name to more traditional American Indian names for the tower, such as “Bear’s House” or “Bear’s Lodge.” The name Devils Tower was retained because it was expected to have better marketing potential.

More Information Open the image to read the text.

The tower is composed of igneous rock (igneous rock is formed through the cooling and solidification of magma or lava.) Approximately 40.5 million years ago, under great heat and pressure, the tower was formed as super-heated igneous rock was intruded (forced up into) an overlying layer of softer, less dense rock. Over the millions of years that passed, this softer surrounding rock eroded away, leaving the now familiar monolith standing high above the surrounding area. The precise geologic details of the formation of the tower are still debated today. 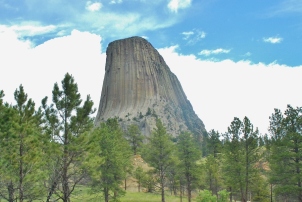 The “back side” of the tower visible on the exit road

An interesting feature of the tower is that the rock was formed by mostly six-sided columns, clearly visible from the ground. The tower stands 867 from base to summit, and the summit is more than 5000 feet above sea level.

The rock tower has become a popular challenge for climbers and as many as 4,000 people climb the tower annually. The tower is also considered sacred to many Native American tribes, including the Lakota, Cheyenne and Kiowa, who considered the climbing as a desecration.

As a compromise, the National Parks Service and the tribes designated June as the month to observe their sacred monument, and discourage climbing. This has been accepted by most climbers.

One eager prairie dog has his position at the edge of the parking area.

The monument is open all year, and includes a Visitor Center, picnic and camping areas, and a prairie dog town. Visitors are cautioned to not feed the prairie dogs, but the little creatures put on such a show, many people find it hard to resist sharing food with them.

Incidentally, as impressive as the massive tower is, somehow I doubt that there is enough area on top of the monument to serve as an Extra Terrestrial’s spaceport.

From Devils Tower we drove into Sundance, Wyoming. This is not the Sundance of film festival fame, but it is the town that gave the Sundance Kid his name. We ate at the recently opened Joni J’s restaurant, where our server was Joshua.  The hamburgers were excellent, even though it took longer than usual to be served. Our order somehow got lost in the kitchen’s digitally order management system. That just gave us time to meet and chat with manager Bob Latham, Joni J’s husband.

After lunch, we drove to Custer, South Dakota, and stopped at Jewel Cave National Monument. Jewel Cave penetrates far and deep into the Black Hills of South Dakota as one of the longest cave systems in the world. The cave gets its name from jewel-like calcite crystals found in the caverns.

From there it was a short drive to the town of Custer where we had reservations at the Custer KOA on the edge of town. From here we would visit Mount Rushmore (next post) and then make the trip home. 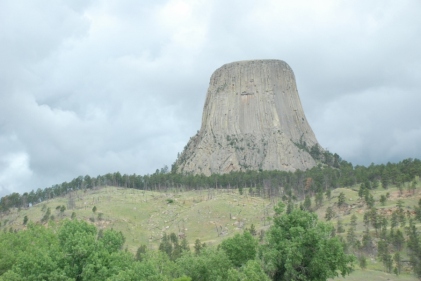 The monument towers over the area

There is a trail that circles around the tower providing different views.

Devils Tower: Just one part of our adventure.

Another view from inside the monument grounds

One of our first views of Devils Tower

One eager prairie dog has his position at the edge of the parking area.

Up close, the columnar structure of the tower is clearly visible. 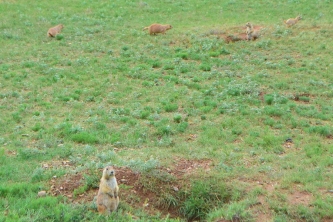 2 Responses to To Devils Tower National Monument, and Beyond