In No 4, we learned about “How I learned to Cuss”

I grew up in a simpler time and in a simpler place. By now, if you have followed my “I Grew Up on a Farm in Virginia” series, you know I was an only child, living with my parents on a relatively isolated farm in Tidewater, Virginia. 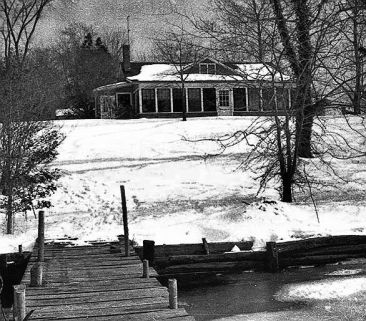 The Lower (Susie’s) House from the wharf in the winter.

There were two residences on the farm. My grandmother Susie lived in the “lower” house (“lower” because it was down on the flat land near the river, while the “upper” house was up on a bluff several hundred feet above the river). I believe the lower house began as a hunting cabin when the property was owned by the Chesapeake and Ohio (C&O) Railroad. The house had been expanded and converted into a comfortable ranch-style home. The house was set back from the river about 100 feet and on a piece of land that was about 20 feet above the river. The front yard sloped steeply down to the river. There was a wall, made of old railroad ties that protected the front yard from erosion and there was a pier that extended from the wall out about fifty feet to the river channel.

We lived in the upper house, located on the top of a bluff above the Chickahominy River, a mile from Susie’s house. Although I do not know this for a fact, I believe Susie probably talked my father into moving to the farm, including having that house built for us. It was a simple house, basically a square box with four rooms, a hall, a full basement with a fireplace, and the kitchen and bathroom sort of attached on the back of the house. The exterior was wood shingle, stained dark green.

The front of Upper House. The road to the lower house goes past the house on the left and down a steep hill.

It was a drafty house, not well heated nor well insulated. Fortunately, the climate in Tidewater Virginia was not terribly harsh. Still, it was not unusual in the winter to wake up in my room with frost on the windows: inside and out. Occasionally, the fireplace in the basement became the place to stay warm when a really cold spell of weather hit.

There was a side porch that provided access to the side door into the living room. I had a swing on the porch that kept me occupied much of the time. It was my place to play, other than in my room. My room was on the northwest corner of the house—in the photo, the windows to the right of he front door. (The smokehouse partially blocks the far right side of the house.)

It was “my space” and other than parentally-directed duties of making sure I kept it picked up and keeping the bed made, my folks let me organize and decorate my room as I wished. From as early as I can remember, I liked plastic model airplane kits, and many of the kits included stands that could be attached to the wall to display the model. By the time I was in high school, there were probably 25 or 30 model airplanes on shelves, on the walls, or hanging from the ceiling.

I also loved to read. All through school, I would check out books from the school library—usually something about animals, dinosaurs, airplanes, or historical biographies (e.g., Abraham Lincoln’s biography). Both Susie and my parents also bought me many books. Often, on a nice weekend day, I would take the current book, hike into the woods, find a comfortable spot to sit, and spend the day reading. I had several favorite reading spots.

But this story takes place well before all of that
At the age of four, I loved being outside. I explored the limits of the yard, wandered in the garden (it was about an acre in size), launched cardboard boxes on large mud puddles to go sailing, and climbed on the tractor in the shed to travel where ever my imagination would take me (before the tractor shed burned down—see “The Day my Mother Burned Down the Tractor Shed”).

My mother and I often took walks around the farm. She knew all of the wildflowers, and most of the critters we encountered. One day, we walked the mile to Susie’s house. That was something of an adventure, walking through the woods, then along the bluff overlooking Diascund Creek probably a 100 feet below, then across open fields to the road that ran along the river, and finally to Susie’s house.

More often, she was busy with household chores or sewing, making the colonially dressed dolls she sold to shops in Williamsburg. So, much of the time I was on my own to explore, usually with instructions to stay “in the yard.” But on a farm, “yard” is not always a well-defined area, and I, like many a young lad, would push the boundaries.
Also, there was a shed across the side yard (not the one that burned!), in which I would play. It became the headquarters for imagining my adventures. Before going outside, I would announce my intentions. For example, I would say, “I am going to go sit on the tractor in the shed and imagine flying around the world.”

The usual response was, “Okay. Just be careful. Don’t fly too far. Stay in the yard,” and off I would go.

One day I announced, “I am going to visit Susie.”

Lois assumed I was going to the shed to act out my “pretend trip” to Susie’s. I got a simple “Okay.”

And off I started, walking down the farm road.

I remember much of that walk vividly. From the house, the farm road went down steeply through a deep cut in an even steeper hill. Trees leaned out over the road; it was like a tunnel through the trees. (In retrospect, having read The Hobbit in later life, it was like Bilbo Baggins starting off on an adventure into the unknown.) At the foot of the hill, the road took one more steep dip as it spilled out between two small fields. Here the road turned from red clay and gravel to white, soft sand. Further along, the road was lined with tall pine trees, and I kicked pine cones along as I walked.

There was a brief transition from the sandy road, down another narrow cut that often was rutted where rain water washed the road away. My father, and later, I spent much time with a tractor and trailer full of dirt repairing this short section of road.
The transition, at about the midpoint in my journey, opened into a large field. The road forked at this point, and I had to make a choice. To the left, the road ran between the pond and the field, and eventually came up behind Susie’s house. To the right, the road cut back into a stand of pine trees toward the river and eventually to the front of house. The stand of trees seemed more of an adventure, and I turned right.
Imagine a four-year-old boy, walking along, kicking pine cones, and just looking up into the trees above, and peering into the woods looking for, but happy not to see, some creature in the underbrush.

At the river, the road turned sharply left. At this corner, the river flooded a low swampy area in the woods on the right. There was an old, worn floating fisherman’s shack moored at the opening to this swamp. Surrounded by cypress trees and their “knees” that reached up from the swamp for air, the shack was an eerie and mysterious place. 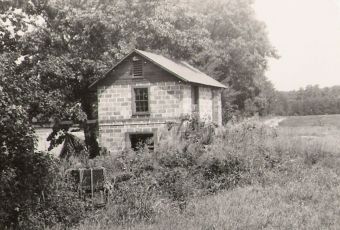 The fish house was where my father kept all of the commercial fishing equipment, and there was an ice room downstairs to keep a catch fresh.

I followed the road to the left and emerged from the woods with the field on the left and the river, visible through about 50 feet of trees and brush, on the right. This last quarter mile of my trek was a straight walk, past the fish house where my father stored his nets and equipment to catch herring during the spring spawning.

From here the front yard of Susie’s house was visible. I walked the rest of the way and walked up to the house. I opened the door and announced, “Hi, Susie.” Needless to say, she was surprised.

I got the expected, “What are you doing here? Where is Lois?”

I explained that she was home. “How did you get here?” was the next question.

“Does your mother know where you are?”

“Yes, I told her I was coming down to see you.”

Well, about 15 minutes later, my mother did show up. She had looked out to check on me and could not find me. Recalling my announced intentions, she began walking down the road. She soon saw my shoe prints in the soft white sand, and even saw that I had taken the right turn at the big field.

I do not recall the conversation after that, except that I was not scolded. After all, I had clearly stated my intentions, had gotten an “Okay,” and I had arrived safely.

Susie thought it was funny, mother was just a tad exasperated, but as I said, she did not scold me. Later, I did get firm instructions about the limits of my explorations away from the yard.

This entry was posted in I Grew up on a Virginia Farm and tagged announcing, house, my room, playing, pretedning, Susie, walk. Bookmark the permalink.