Grand opening accompanied by fly-overs and ramp tours of WWII B-17 bombers and P-51 fighters.

Early in 2018, the US Air Force Museum announced that it would be unveiling a new exhibit dedicated to the Memphis Belle, and that the three-day event would also feature fly-overs by three B-17s and several P-51 fighter aircraft that often accompanied the bombers on raids into Nazi German from 1942 to 1945.

This announcement set in motion planning for a trip to the museum, for the new display and one of the rare occasions where several B-17s would be airborne together.

The prototype B-17 first flew in 1935. A total of 12,731 of the Boeing-designed aircraft were manufactured during the Second World War by the Boeing, Douglas, and Lockheed companies. Today, fewer than a dozen B-17s remain airworthy worldwide, so the opportunity to see several of the aircraft together is a rare event.

The Memphis Belle, June 9, 1943, returning to the US after successfully completing 25 bombing missions over Nazi Germany (Source: USAF)

Dubbed the “Flying Fortress” because Boeing believed that, with sufficient defensive firepower, the B-17 could fight its way in and out of enemy airspace. For example, Aluminum Overcast (a B-17G now owned and operated by the Experimental Aircraft Association and one of the three B-17s participating in the museum’s Memphis Belle exhibit grand opening) was armed with 13 50-calibre Browning machine guns. Still, fighter escort proved essential to protect the bombers from enemy fighters.

The other two aircraft participating in the ceremony were the “Yankee Lady” (B-17G, owned by the Yankee Air Force) and the “Movie Memphis Belle” (owned by the National Warplane Museum in Genesco, NY). 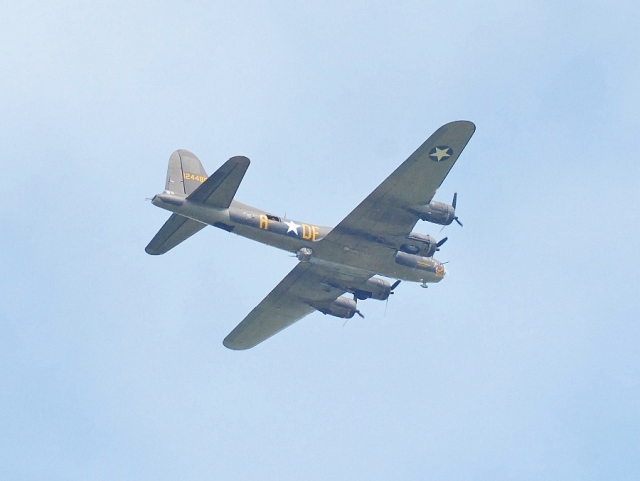 The Memphis Belle attained notoriety because if was one of the first aircraft to survive 25 bombing missions over Europe during WWII. The aircraft and its crew were returned to the U.S. for a promotional tour to help sell war bonds.

The official opening of the Memphis Belle exhibit was Thursday, May 17. However, the three B-17s were due to arrive the day before, perform several fly-overs, and land and be available for tours. The weather, however, did not cooperate. Low clouds prevented their arrival at the scheduled time. Later the sky cleared somewhat, and the three aircraft did make a fly-over but did not land.

Three B-17s — Aluminum Overcast, Movie Memphis Belle, and Yankee Lady — accompanied by P-51 Escort Fighters much as they would have appeared in WWII

Not having been to the museum since the opening of the new fourth hangar, we spent several hours walking through the Research and Development and the Presidential collections of aircraft. The aircraft in this section are prototype, limited production, or highly specialized aircraft such as the XB-70 supersonic bomber prototype or specially modified presidential aircraft. XB-70 Valkyrie on display is the only one remaining of the two that were built. The other was destroyed in a crash early in the test program. The 189-ft-long aircraft dwarfs many of the nearby aircraft in the hangar yet takes up only a small portion of the total display space. 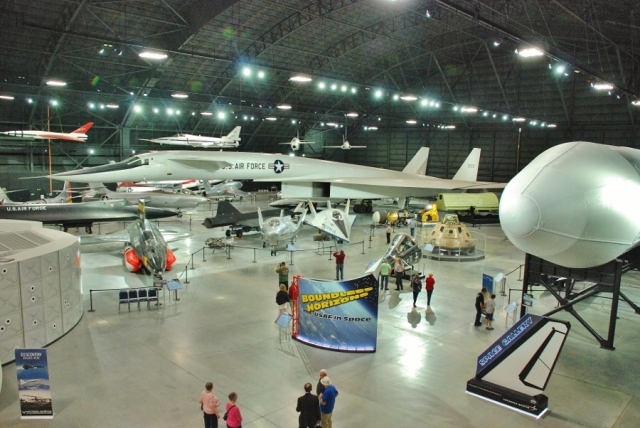 Just a small part of the exhibit in the AF Museums new fourth hangar. The XB-70 Valkyrie looms over the other aircraft.

The AF Museum Memphis Belle exhibit is well displayed, and the aircraft and its history are well interpreted. The aircraft is mounted on stands that allow visitors to get a look up into the bomb bay. Signage in the exhibit provides detailed descriptions of the aircraft, its mission, and its history. 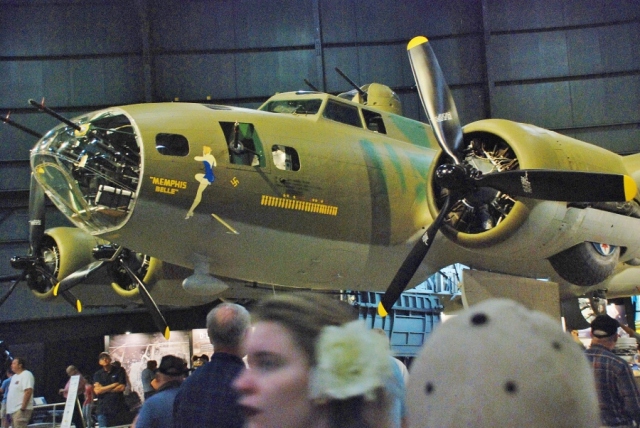 Restoration of the aircraft for the exhibit began in 2005 and was completed in 2017. According to reports, the aircraft has been restored to its condition and appearance when it returned to the United States. Since there is no plan to ever fly the aircraft, the engines were not restored to operating condition.