There I Was – Earliest Memories

I was sitting on the front porch this morning as I usually do (weather permitting) just thinking back—random thoughts. Heard an aircraft flying high overhead, and got to thinking about my interest in aviation, wondering what sparks a particular interest in an individual to start them on a path in a particular vocational or avocational direction. And that led me to my earliest aviation related memory.

About 1950, at the age of six, my father took me to an air show at the airport in Richmond, Virginia. He too, had been interested in airplanes, though other than a few rides, had never done any flying (at that time).

The one image that sticks in my memory was seeing a Douglas C-124 Globemaster II parked on the ramp. It was a huge airplane—maybe not by today’s standards, but in 1950 it was one of the largest transport aircraft flying. 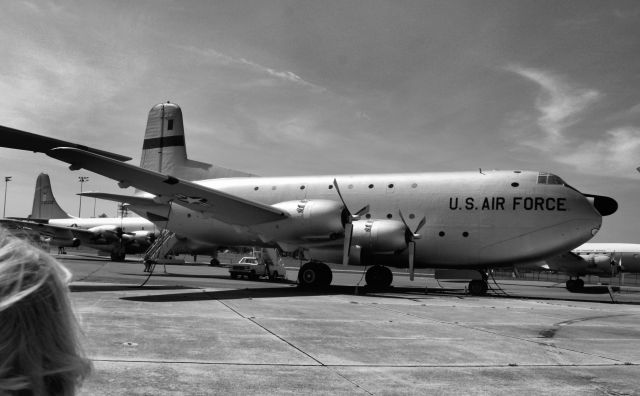 At a recent visit to the Air Mobility Museum at Dover Air Force Base, Delaware, I saw what could well have been the very same aircraft from the very same angle that I recall from that first experience. It is not quite as awe-inspiring—not when there are now aircraft many times larger and within immediate view—as it was to that six-year old, but clearly a fond memory.

It was at that moment that the seed was planted for my interest in all things related to aviation.

C-124s provided heavy airlift during the Korean War and the Southeast Asia War. Other important airlifts conducted by C-124s included resupply missions to Antarctica, refugee evacuation in the Congo and mercy flights to Morocco, Chile and elsewhere throughout the world following floods and other natural disasters.

To facilitate cargo handling, the C-124, or “Old Shakey” as it was affectionately known, featured “clamshell” loading doors and hydraulic ramps in the nose and an elevator under the aft fuselage. It was capable of handling such bulky cargo as tanks, field guns, bulldozers and trucks. It could also be converted into a transport capable of carrying 200 fully-equipped soldiers or 127 litter patients and their attendants in its double-decked cabin.

Most C-124s were transferred to the Air Force Reserve and the Air National Guard by 1970, and all were released from active service in mid-1974. The aircraft on display was assigned to the 165th Tactical Airlift group of the Georgia Air National Guard following its service with the USAF. It was flown to the museum in August 1975.

About/Contents Entry
The seed for my interest in flying and aviation was planted in 1952 at an airshow in Richmond, Virginia–There I was – Earliest Memories.

This entry was posted in There I was... and tagged age six, air show, airplane, airport, aviation, C-124, flying, Globemaster, Richmond, There I was.... Bookmark the permalink.

3 Responses to There I Was – Earliest Memories