It was a quiet morning in the mountains…

I had selected a room at an inn on what should have been a quiet mountainside for our trip to West Virginia. The mountain vista from the balcony was the perfect accompaniment to an early morning cup of coffee. It was not entirely quiet because because of a moderately busy highway several hundred yards below the inn, but trees muffled the sound to an acceptable level.

Inside, refilling my coffee, I could hear the sound of an approaching engine. I assumed it was a heavily laden gravel truck using his Jake Brake to control speed down the steep grade. Soon, however, the sound was directly overhead, and clearly a low flying helicopter.

McDonnell Douglas Helicopter – the Source of the Noise

I can’t resist aircraft noise. I grabbed my camera and headed out the front door in time to see the flying hedge trimmer! 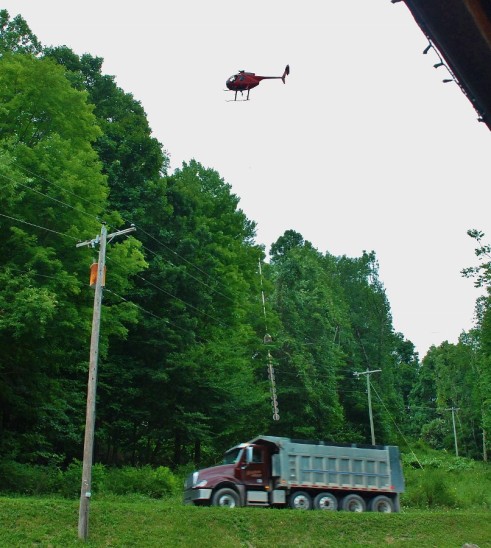 Above the trees, directly across the road, a helicopter was hovering with a huge string of rotating saw blades suspended below the chopper. The  pilot was working the blade up and down, and forward trimming tree limbs back from the power lines. 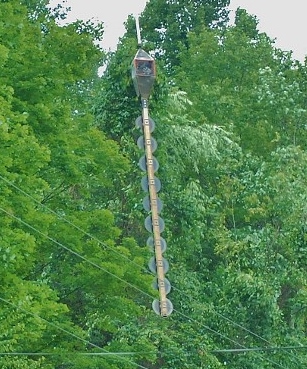 It was clear to me that it would have been impossible to trim the trees on this rocky slope any other way, except to cut down whole trees. After about an hour of trimming, the power lines were bordered by neatly square-trimmed trees.