Apparently our property lies under a busy airway to the east and south, probably into Atlanta or Charlotte. When atmospheric conditions are right, you can track the flights headed east by watching the formation of condensation trails or contrails.

In the photo, the contrail on the right is the most recent, and this was the location of the other three before the wind moved them to the left (north). The aircraft were spaced approximately two minutes apart, producing the relatively even spacing of the parallel contrails. 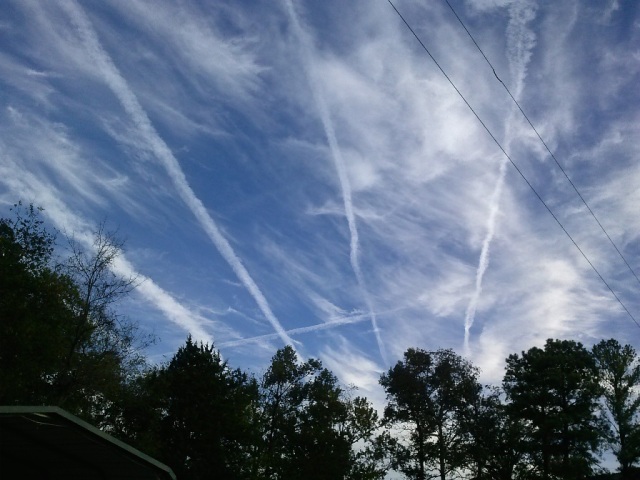 Contrails made by airliners headed east to Atlanta or Charlotte.

The term, contrail, actually explains what these are. One of the major components of jet exhaust is water vapor. The hot water vapor exits the aircraft’s engine and is cooled rapidly, being condensed into visible water vapor (a dense fog), or in this case fine ice crystals that hang in the air until the water in the crystals eventually evaporate (actually, sublimate when water molecules in ice evaporate).

If the water vapor condenses to fog-sized liquid water droplets, the contrail tends to fade or evaporate within minutes of being formed. When they form from equally tiny ice crystals, they sublimate at a much slower rate, and may linger ten minutes or more.

There are two sources of contrails: from the engine as described above and aerodynamic vortexes produced at the wingtips and at other point on aircraft. Within a vortex, the pressure and temperature drop rapidly. If the humidity in the air is high enough, the water vapor condenses as the temperature drops, creating a contrail at the trailing edge of the wingtip.
In both cases, the flight crew has no direct control over the production of the vortexes—they are a product of aerodynamics and atmospheric conditions.

I have flown airplanes that generated contrails. One of the most impressive sights is to seeing rope-sized contrails flowing off of the wingtip of the lead aircraft in a formation flight as we maneuvered through a series of high-G turns. During these turns, the wingtips generate a very low-pressure vortex. Incidentally, a wingtip vortex exists at the wingtip of any wing generating aerodynamic lift.

This is especially noticeable in commercial aircraft during approach to landing or just after takeoff. The vortex is not as strong in cruise flight because the wing is working more efficiently aerodynamically at cruise airspeeds. At slower speeds, as during takeoff and landing, the wing is “working harder,” i.e., generating enough lift to fly the airplane but at a much slower airspeed. This generates a more intense wingtip vortex and commercial airliners can be seen generating contrails just after takeoff and during approach to landing if the temperature and humidity of the air is just “right” for this to happen.

I am confident that these are not chemtrails. Chemtrails are the product of a popularly held conspiracy theory that postulates that these trails are actually some kind of chemical substance being dispersed intentionally by commercial and military aircraft for the Government in a secret program for the purpose(s) of: solar radiation management, psychological manipulation, human population control, weather modification, or biological or chemical warfare.
That is a discussion for a different day.

About/Contents Entry
A Lazy Day Watching Contrails (Not Chemtrails) shows contrails overhead and describes how they are formed. Chemtrails are defined.

This entry was posted in The View from Pelham and tagged chemtrails, condensation, contrails, engines, trails, wingtip. Bookmark the permalink.

2 Responses to A Lazy Day Watching Contrails (Not Chemtrails!)