Why I Should Have Enlisted in the Navy

This is more of a personal note to my daughters, but it is a story I would tell anyone if I had the occasion. I was born in Norfolk, Virginia, and spent my first three years there. And, here is why I probably should have enlisted in the Navy rather than the Air Force.

One evening, while watching “Victory at Sea” (anybody out there remember that series?) I recall my father telling me about taking me on a tour of the aircraft carrier, USS Yorktown when it was in port after World War II. According to him, I was about two years old, and therefore I have no recollection of it. I do not recall any stories about the USS Missouri (unless I have the ships confused).

Going through the baby book that my mother assembled for my first two years, I came across the following entry on the “Memorable Occasions” page.

The text of the page below reads: “October 20, 1945 – 1 yr 1 wk – Baby Jeff with Dad and Mother stood on the spot on which World War II was formally ended. The USS Missouri, the ship on which General McArthur accepted surrender from the Japanese; came in port (N.O.B) directly from Tokyo Bay and we boarded her. We think this an occasion worth the noting.” (Note: “N.O.B.” is the Naval Operating Base, Norfolk, Virginia.)

The instruments of surrender were signed on September 2, 1945 on the deck of the USS Missouri. Presumably, the photo below shows the “spot” of the surrender mentioned in the book entry above. 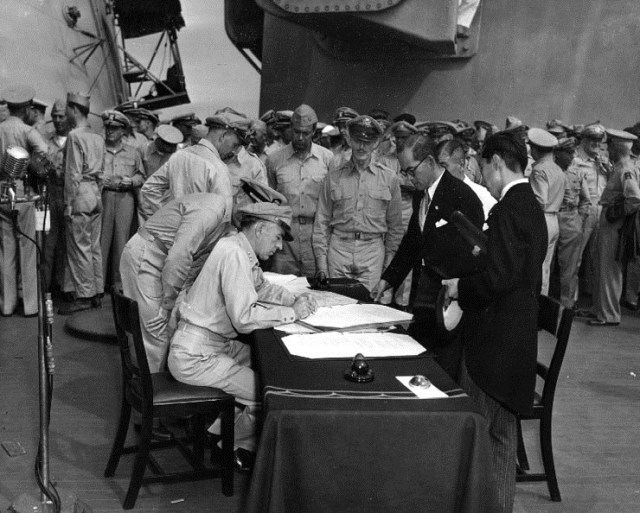 Corrections being made to the surrender documents during the signing

The keel for the USS Missouri, an Iowa class battleship, was laid in 1941 at the New York Naval Shipyard, Brooklyn, and the ship was launched in 1944. In February 1945 she provided support during the invasion of Iwo Jima, and later the invasion of Okinawa. In April the ship was struck by a kamikaze attack that caused only minimal damage to the ship. The Japanese pilot, found in the wreckage of his aircraft, was given a military burial at sea. 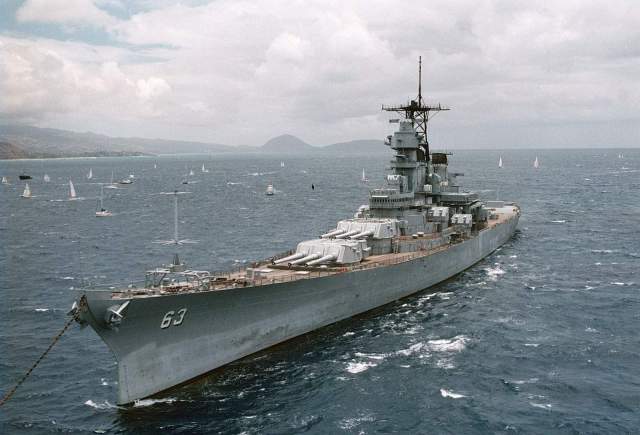 The Battleship USS Missouri at anchor near Pearl Harbor

On September 2, 1945, Japan formally surrendered to the Allied Forces aboard the Missouri in Tokyo Bay, ending World War II.

Later, in 1952 and 1953, the battleship would conduct shore bombardment during the Korean War.

In 1971, she was decommissioned and mothballed at Puget Sound Naval Shipyard, Washington.

The USS Missouri was decommissioned for a second time in 1991. In 1996 the ship was donated to the USS Missouri Memorial Association and in 1999 was opened to the public on Battleship Row, Ford Island, Pearl Harbor, Hawaii.

About/Contents Entry
Based on my tour of the USS Missouri, I should have enlisted in the Navy rather than the Air Force.

This entry was posted in I Grew up on a Virginia Farm and tagged aliens, baby book, battlewhip, Japan, Missouri, surrender, World War II. Bookmark the permalink.

5 Responses to Why I Should Have Enlisted in the Navy