The Boulder in the Pulpit – The Sallie Howard Memorial Baptist Church, Alabama

What do you do when you want to build a church, but there is a huge boulder in the way? Make it part of the church, of course! 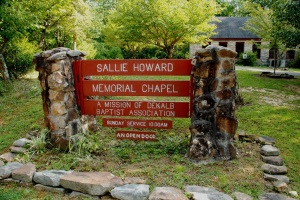 I am beginning to believe that “serendipity” could easily be a synonym for “camping.” It seems that every camping trip leads to some unanticipated discovery or new experience. This two-night trip to DeSoto State Park above Fort Payne, Alabama has been no different. We selected DeSoto State park because: it was close (less than two hour’s drive), it offered the wi-fi I needed to do some work I promised, the shops in Mentone might be open, and I wanted to get a few more photos of DeSoto Falls.

By the second afternoon, I was pretty discouraged. The shops were still closed, I could not get to the spot I wanted to for waterfall photos, there had been no noteworthy meals, and I was behind on my promised work.

After an unsuccessful trip in to Mentone, I dug into my work. There was a telephone conversation going on across the camper. I only half heard my wife say, “Why no, we haven’t seen the church with the rock in it.” Before I heard any more, I had “Googled” “church with a rock in it” and added “Alabama.” It popped right up. The directions indicated it was less than a mile from the campground. 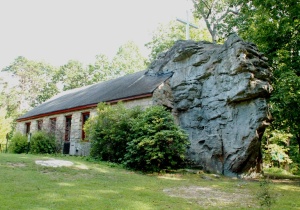 Fifteen minutes later we were there, standing before this modest stone church, built with a huge rock outcrop incorporated into the rear of the church.

The church was built by a remarkable man, Milford Howard, who with only two years of formal schooling became a lawyer and was admitted to the bar in Alabama and was even elected to Congress.

Over the years his fortunes fluctuated and he and his wife Sallie had moved around the country, ending up in California. Howard decided to return to Alabama, intent on building a school. His wife stayed behind in California—she had a successful and well-paying job, and she regularly sent money to Howard to support his project. In 1925, Sallie died. Howard’s money ran out, and his effort to build the school failed. 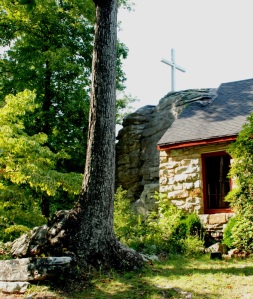 A tree beside the church has grown out and abound a large boulder, as if mimicking the church.

Friends gave him money to return to California, but Howard used the money to build the church as a memorial to Sallie.

The church is as remarkable as the man. It is built around a huge boulder. On the interior, this boulder is part of the pulpit.

The remarkable boulder makes up most of the back wall of the chapel. Inside, the massive stone extends out over the pulpit. The inscription on the beam above the pulpit is from Sallie’s last letter to Howard: “God has always been as good to me as I would let him.”

Today, the chapel is an active Baptist Church with regular services. The church is always open, and while we were being astonished by the interior view of the huge bolder over the pulpit, we met Carolyn a member of the church who stops by every day “just to check on things.” She gave us a brief history of the church.

The Inside the church, the boulder extends over the Pastor’s pew.

The incorporation of the church into the boulder is an example of ingenuity, and well worth stopping by to see if you are ever in the area.

A view of the interior of the front of the church

Often referred to as “Howard’s Chapel,” the church is located less than a mile from the DeSoto State Park’s registration building and campground on County Road 165 at the end of County Road 89. The Civilian Conservation Corps (CCC) and members of the local community helped finish the church. There is no fee and the chapel is always open.

And, therein lies the serendipity of Howard’s Chapel.

Posting from the road!

The door to the church is always open

A tree beside the church has grown out and abound a large boulder, as if mimicking the church.

Plaque outside the church.

Plaque on the door

Plaque on the door 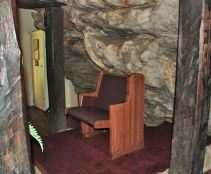 The Inside the church, the boulder extends over the Pastor’s pew. 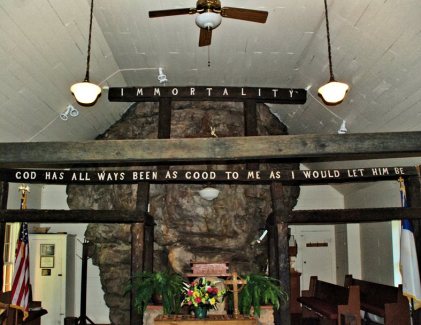 A view of the interior of the front of the church

3 Responses to The Boulder in the Pulpit – The Sallie Howard Memorial Baptist Church, Alabama