The T-37 Trainer and Dragonfly

Tuesday Topics – Aircraft of the Month

The T-37 was low enough to the ground to step up into. (USAF Photo)

The prototype XT-37s were almost a total success from the very beginning. The only problem, resulting in an aircraft crash, was the fact that it was very difficult to recover from a spin. Several design changes resolved the spin recovery problem, but the aircraft still required a very precise procedure for recovery.

Otherwise the aircraft was easy to fly. The aircraft had a maximum level flight speed of about 425 mph, but was normally operated around 320 mph for fuel economy. It had a range of about 900 miles. It was equipped with instruments and navigation equipment typical of operational military jet aircraft. This was years before the Global Positioning System (GPS) or even digital instruments. Every inch of the instrument panel was filled with round gauges, navigation instruments, radio switches and knobs, etc. 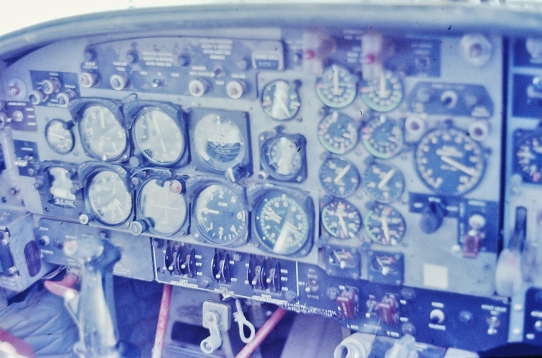 Military pilots come in all sizes, but the seats in the T-37 do not adjust. There was a crank in front of the pilots that allowed each one to move the rudder pedals for or aft to the proper position. The aircraft was equipped with emergency ejection seats. Beside the seat cushion were handles. Inside each handle was a trigger lever. Pulling up on the handles armed the trigger. Squeezing the trigger fired a shell, roughly equivalent to a very large shotgun shell. The pilot would literally be shot out of the aircraft.

The one absolute feature about the T-37 that everyone experienced—even people living around the airport, was the noise that gave it the name “Tweet.” The aerodynamics of the engine intakes created a very loud high-pitched, shrill whistling sound. Everyone on the flight line was required to wear ear protection.

The T-37 was a pilot’s airplane. Flight controls were connected by cables and pulleys. The feel in the control stick was the air pressure on the flight controls. It was even possible to consider making a dead-stick landing if both engines failed. Good landings were not hard, but they did require the pilot to fly the aircraft to a good landing. More advanced aircraft, while still requiring pilot skills, were often more procedural in operation than strict hand-eye-seat of the pants coordination.

The T-37 as I I knew it. The strake (rail) around along the nose above “U.S. AIR FORCE” was added to assist in spin recovery. Visibility out of the domed canopy was excellent. (USAF Photo)

The “Tweet” was fully aerobatic, and the training syllabus included a full menu of rolls, loops, lazy-eights, and chandelles. Each maneuver advanced the pilot’s skill in precision control of the aircraft in any attitude.

The aircraft was also used to teach instrument (blind) flying. The aircraft could be fully controlled by reference to the instruments, including loops and rolls. Instrument training, however, was more about navigation through and above clouds or at night, and arriving at the destination safely. To simulate instrument conditions, the student would slip a piece of cardboard into the upper part of his helmet’s visor so he could not see out of the canopy. Approximately half or more of the T-37 flight training syllabus involved instrument flight training. Pilots soon learned that instrument flight required more precise control than aerobatics.

The white and black paint scheme was used when the aircraft were new. All we ever saw in training were metallic. (USAF Photo)

The first model accepted for flight training was the T-37A. The United States was involved in the Cold War with Russian (generally 1941 to 1991) and there was a demand for a strong military. Also, the United States would be drawn into the Viet Nam conflict. There was a demand for pilots for all types of aircraft, and the Air Force ordered 444 T-37A aircraft to support jet-powered flight training. (Air Force pilots all went through the same flight training program–their assignments were not determined until after graduation.) The last T-37A was delivered in 1959. While it was an effective trainer, it was considered under-powered. An additional 552 T-37Bs, with more powerful engines and upgraded navigation instrumentation were manufactured through 1973. Earlier operational T-37As were upgraded to the T-37B standard. 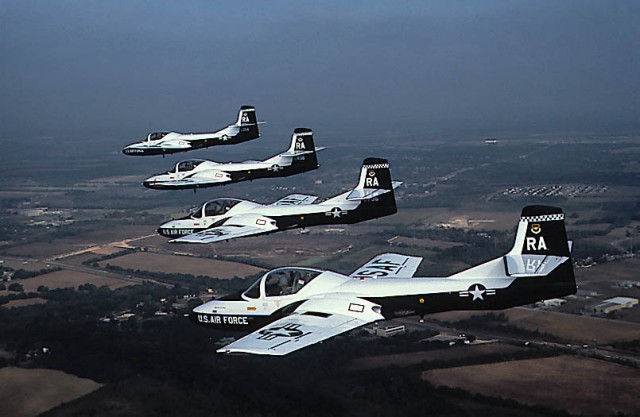 We flew only two or three formation training flights in the T-37. Most formation flight was flown in the T-38. (USAF Photo)

Cessna also built the T-37C, primarily for export. It was designed to be combat-capable, armed with guns, bomb racks, and missile attachment points. The US military purchased a limited number of the T-37C Dragonfly for ground attack aircraft. A total of 273 T-37Cs were produced. T-37s have served in the air forces of at least 20 different countries.

The T-37 production line was shut down in 1975. Many examples are still flying in other countries and some are in private hands.

A T-37 taxis for take off at Reese AFB. Photo taken from under a T-38 wing. (Photo: Jeff Richmond)

About Stalls and Spins

As mentioned earlier, it was essentially impossible to recover the prototype T-37 once it was in a spin, leaving the pilot no option but to eject. Cessna made changes to the prototype that enabled pilots to recover from the spin, but it was still a unique, involved procedure.

All pilots, civil and military learn about aerodynamic stalls, how stalls may lead to spins, and how to recover from stalls and spins. A stall occurs when the smooth flow of air over the wing is lost. (Okay, you pilots out there, I am not going into angle of attack and boundary layer separation here!) The wing essentially stops “flying” and the aircraft’s nose drops down sharply, sometimes turning as it drops. If the turning continues through the stall the aircraft descends sharply, rotating (spinning) as it descends. Pilots learn that in most aircraft, you have to reduce power to idle and push the control stick forward to stop the stall and rotation, then if necessary, recover from the dive that results. It is really quite simple. But not for the T-37.

T-37 pilots practiced stalls and stall recovery. It went something like this: We would reduce the power to idle and try to hold the nose of the airplane level or up until it stopped flying. The aircraft immediately “stalled” and rolled one way or the other. The aircraft entered a steep nose-down, rotating falling movement—a spin. Moving the control stick did nothing, and could aggravate the stall. The procedure was to continue to hold the stick full back, and allow the aircraft to fall and enter an established, stabilized spin—this took about two full turns in the spin. As soon as the aircraft made the third turn, the pilot was to slam the stick full forward briskly. This pushed aircraft into an even steeper dive, but broke the stall, putting the aircraft in a controllable dive. The pilot would stop the rolling motion, apply power, and recover from the dive.

Story (There He Was)

Jet engines were very slow to spin up, taking 10 to 12 seconds to reach full power after the throttles had been from idle moved full forward. This was not normally a problem, but required caution when landing. Each day, during training, several students were assigned to the mobile control tower, located near the runway. We kept records of each aircraft as it took off and landed, and noted any deviations from normal operations.

We were watching our senior class officer making a solo approach to land. He was just about to touch down, engines to idle, when a gust of wind caught the airplane and it rose up about 25 feet above the runway. Deciding to go around and come back for another landing, he pushed the throttles full forward—which was good. And he then immediately raised the landing gear–which was not good!. The gust of wind went away while the engines were still winding up, but not producing enough thrust to fly, and the aircraft settled onto the runway, just as the wheels disappeared into the fuselage, resulting in a gear up, belly landing.

Lesson: Do NOT raise the landing gear on a missed landing until the aircraft has established a positive climb. Had he left the gear down, the aircraft would have bounced and then been flying again. It would not have required a crane to come out and lift the plane so they could put the gear down. Little damage was done to the aircraft and it was back on the line within a day or two.

Author’s Note: I have always thought the T-37 would be an excellent personal aircraft. Technologically, it was pretty simple, comparable to many general aviation aircraft. It was easy and fun to fly, and offered aerobatic capability for a little weekend fun flying. It was not pressurized, so use of an oxygen mask would be essential for any flying above 10,000 feet, but modern oxygen masks are light and comfortable with the microphone for intercom and radio built into the mask. But like any aircraft, they would be expensive to own and operate, but no more than modern business aircraft.